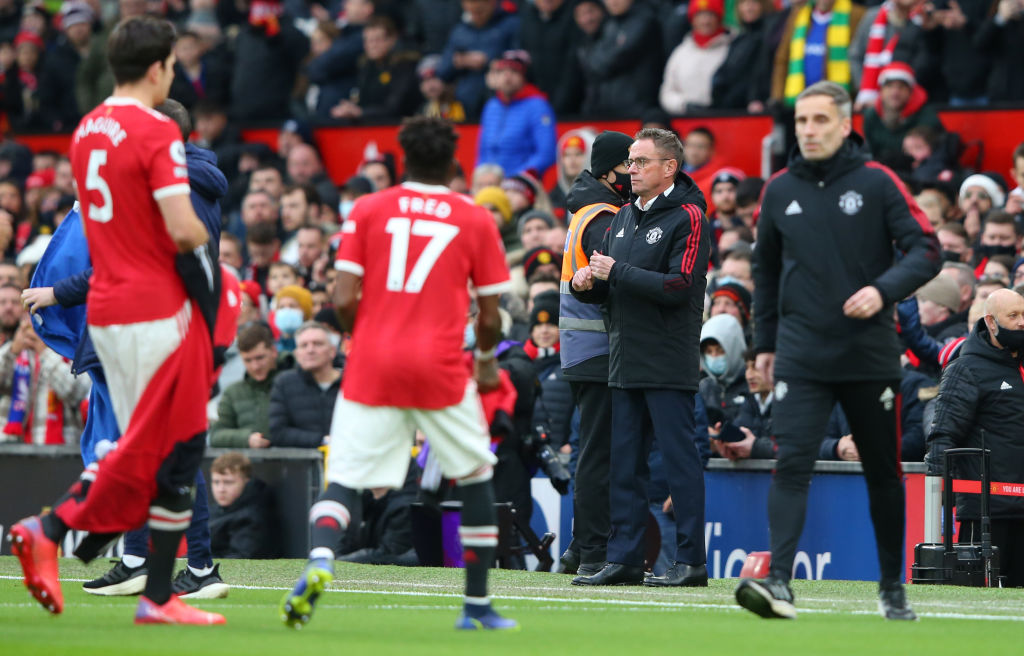 Jamie Carragher has used Borussia Dortmund as a template for the way Ralf Rangnick is likely to set up his Manchester United side.

Speaking on Monday Night Football, Carragher brought up Dortmund’s recent clash with Bayern Munich to highlight how United could look under their interim manager.

While the two clubs may have experienced different results at the weekend, their approaches to the match were similar. Understandably, considering the impact Rangnick has had on German football.

The 63-year-old’s first game in charge of the Red Devils ended in a welcome 1-0 win over Crystal Palace at Old Trafford. Meanwhile, Dortmund were defeated 3-2 by their nearest title rivals on Saturday.

Despite the dissimilar outcomes, the thought process of both coaches had a similar theme. Go forward with force, attack the spaces, and press the opposition.

“That first pass is forward quick and straight away you see (Erling) Haaland and he’s off,” said Carragher, talking about one of Dortmund’s rapid breaks.

“Just over six seconds, they have a counter-attack and almost score. Again, just talking about the football the new Manchester United manager likes.”

Clearly, the new United boss has instructed his players to pass proactively and to look for the two frontmen at every opportunity.

Carragher also thought the positions players from either team took up were comparable.

“Something that stood out for me (as similar to) Manchester United at the weekend was a front two at Borussia Dortmund in Marco Reus and Erling Haaland and also narrow wide players,” the pundit said, delving deeper into BVB’s tactics.

“At Dortmund it’s more of a diamond in midfield but with Jude Bellingham – who we know is a more central player – playing to the left and Julian Brandt playing inside on the right.

“We saw a lot of that (similar position play) from Manchester United. This is what (Rangnick) will want from players in those positions, making that run between full-back and centre-back.”

Rangnick used a 4-2-2-2 formation for his United debut, asking Jadon Sancho and Bruno Fernandes to undertake the same role as Bellingham and Brandt did for Dortmund.

Rashford and Ronaldo played up front in a mirror image of Reus and Haaland – a combination of experience, efficiency and electric pace.

It’s a system that worked wonders for United on Sunday and almost paid dividends for Dortmund the day before.

He may be stationed in Manchester now but Rangnick’s formula remains red hot across Europe.

In other news, 'His ability': Carragher thinks £60k-a-week Liverpool ace perfect for Spurs