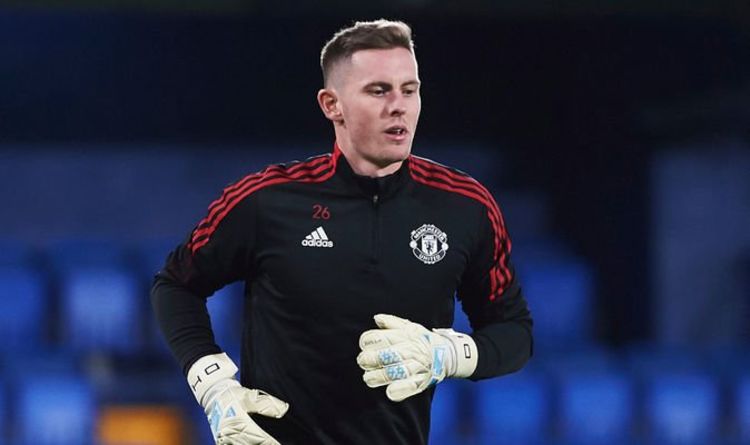 Manchester United goalkeeper Dean Henderson has reportedly been given an escape route in January with Ajax interested in taking him on loan. The Englishman has struggled for action this campaign amid David De Gea's fantastic form, and although he is believed to be open to a departure, interim boss Ralf Rangnick is, as yet, undecided.

Since Ole Gunnar Solskjaer made way for Michael Carrick, and subsequently Ralf Rangnick, a number of peripheral stars have been given the chance to impress at Old Trafford.

The likes of Alex Telles, Donny van de Beek and Jadon Sancho have all seen their fortunes improve, although Henderson is yet to benefit from the change of leadership.

One solitary appearance is all he has managed this campaign, and that was in a dismal Carabao Cup defeat to West Ham.

It has been a frustrating few months for the 24-year-old, who looked to have made his breakthrough for the Red Devils towards the back-end of last season.

JUST IN: Everton fans refuse to walk out as 'mass protest' against Arsenal fails to materialise

Dean Henderson has attracted interest from Ajax ahead of the January transfer window (Image: GETTY)

However, he contracted COVID-19 which kept him side-lined for the start of this campaign, and since De Gea was given another chance, United have not looked back.

According to the Manchester Evening News, Red Devils legend and Ajax CEO Edwin van der Sar is an admirer of Henderson and has already put the feelers out regarding a move.

In fact, the Dutch side had enquired about Henderson as far back as 18 months ago, but this time around circumstances point towards a deal in the making.

Goalkeeper Tom Heaton was signed by United during the summer which would provide back-up in Henderson's absence, but Rangnick is so far undecided when it comes to his plans for the stopper.

Andre Onana, who had been first choice since receiving a doping ban back in February, has only featured once since his spell on the side-lines came to an end.

Maarten Stekelenburg, Onana's 39-year-old understudy, sustained a season-ending injury earlier this season, and 38-year-old Remko Pasveer has held down the fort since.

That could leave the door open for an exciting young stopper like Henderson, who would be eligible to play in the Champions League knockout rounds as Ajax have already sealed their status as Group C winners.

Furthermore, Van der Sar's friendly standing with United could be used to Ajax's advantage, given the Dutchman spent six years between the sticks at Old Trafford.