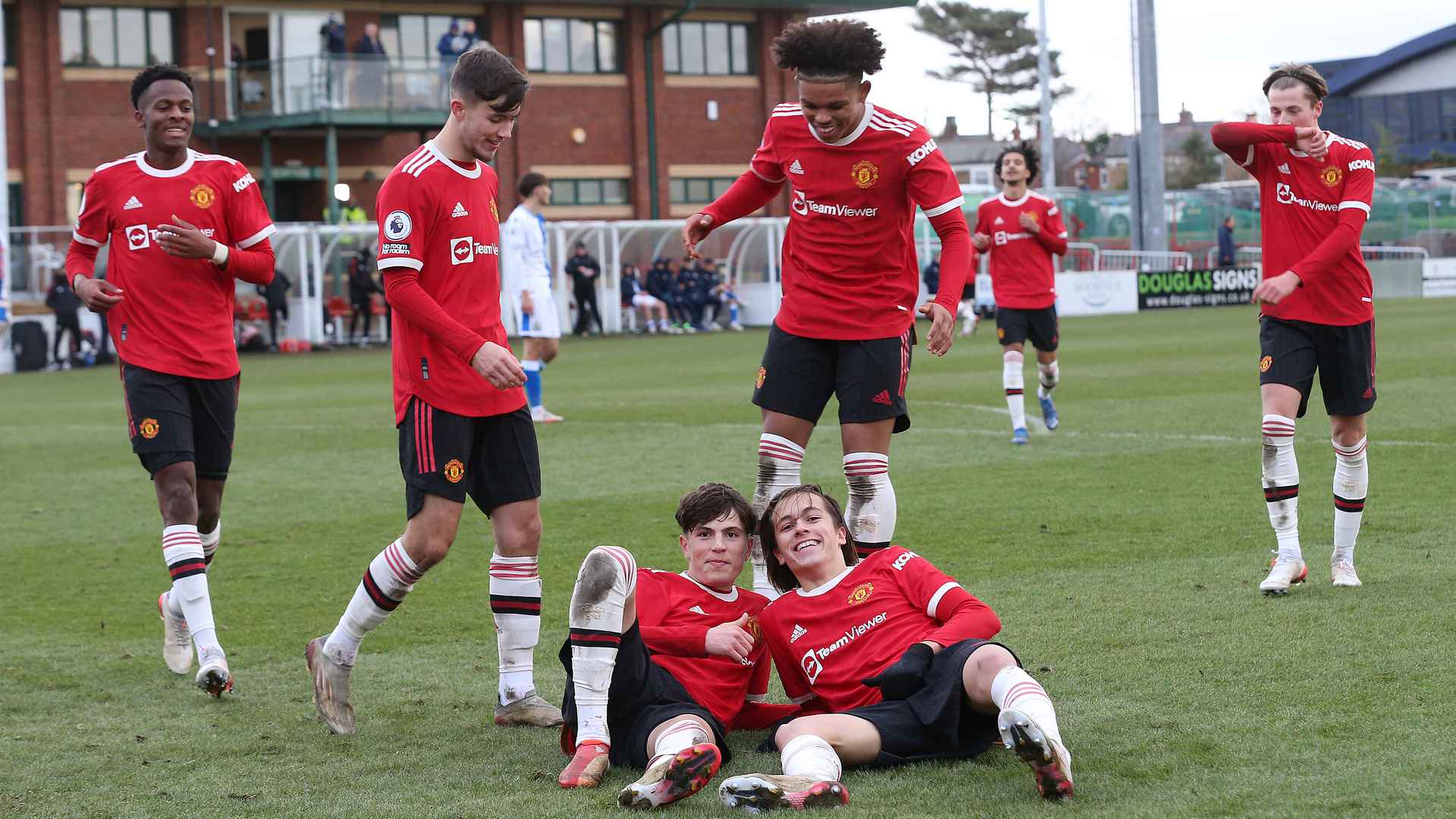 As a new era begins for the Manchester United first team, four Academy graduates played in the first match of Ralf Rangnick's reign.

There was plenty of news from the Academy this week, with the Under-23s and Under-18s both in action at the weekend and several impressive performances from loanees.

Here's the latest from the last seven days...

IN CASE YOU MISSED IT

Up in the first team

Speaking in his first press conference as United manager, interim manager Ralf Rangnick made clear his commitment to the Academy.

"It's about recruitment but also making sure every year we have academy players good enough to make it into the first team," the German coach said. "One doesn't exclude the other."

As United beat Crystal Palace 1-0 on Sunday afternoon at Old Trafford, that message was followed up by action. Anthony Elanga and Mason Greenwood both came off the bench to help United to victory, Rangnick saying after that Greenwood "is a very gifted homegrown player and I’d love to give him more gametime."

In the same game, midfielder Scott McTominay made his 150th appearance for United, a wonderful achievement for the Lancashire-born Scottish international who has been associated with the club since he was a five-year-old.

A dominant first-half display set the tone for United's comprehensive win at Blackburn Rovers on Sunday lunchtime. Alejandro Garnacho continued his good spell of form after stepping up from the Under-18s, scoring twice in a 4-0 victory.

The Spanish winger put United in front early on, heading home a Charlie Wellens cross from the right-wing, and although Blackburn could have equalised through Joe Nolan - his header went wide of the left post - the lead was doubled before the break. Charlie Savage won possession high up the pitch and fed Shola Shoretire quickly, the attacking midfielder turning well and rifling the ball home with power.

After the break, Blackburn wrestled themselves back into the game, forcing a couple of good saves from Matej Kovar. Manager Neil Wood said "we knew Blackburn would give us a reaction and we lost a little bit of control."

"We just spoke about it in the dressing room, when those moments happen, what do we do to get that control back, and the lads have all the answers it's just about implementing that on the pitch."

United did get some control back and Garnacho scored his second, storming forward from his own half and finishing into the bottom left corner with his right foot. Blackburn had chances to get back into the game but couldn't take them and that left Wellens to finish the game off in good style with an 85th-minute fourth for the Reds.

"The quality wasn't there to say we deserved anything from the game," manager Travis Binnion said after a 3-0 defeat to Everton at a windswept, rainy Finch Farm on Saturday.

"On the balance of chances, the result is fair. We created some good moments but the last pass wasn't right, the last cross wasn't right. With better decisions and more quality, we definitely get on the scoreboard. We've been a little bit naïve. The conditions probably made it more difficult for us trying to play out but we've made poor decisions."

Emilio Lawrence smashed in Everton's first goal just before half-time, a late blow for United having come close to scoring from a corner earlier on. As conditions worsened in the second half, United were playing against the wind. Everton's second came from a Francis Okoronkko header at the back post from a corner, and the third four minutes later from Martin Sherif, another back post finish, this time from a loose ball after a right-wing attack.

James Garner has been named in the EFL Championship Team of the Week after scoring and assisting in Nottingham Forest's 2-0 win against Peterborough. The 20-year-old midfielder was alert to a loose ball in the box in the 72nd-minute, tapping home to put his side ahead.

It was his delivery from an 84th-minute corner that was converted by Ryan Yates to double the lead and wrap the game up. Forest manager Steve Cooper said post-match that Garner is "doing really, really well" after "fighting to get in the team" over the last few weeks.

In the Premier League, Brandon Williams continued his run of games for Norwich City as the Canaries' four-game unbeaten run was ended by Tottenham Hotspur on Sunday. The Gorton-born defender turned out at wing-back as Dean Smith set up with a five-man defence, and Williams said after the game that "as long as I'm playing I don't really care where I'm playing, I just enjoy playing my football and I want to learn." On the same day, Axel Tuanzebe came off the bench to help Aston Villa see out a 2-1 win against Leicester City.

Williams goes in for the tackle on Harry Kane.

In the Championship, Di'Shon Bernard helped Hull City to a 1-1 draw with Reading and Ethan Laird played 78 minutes for Swansea City as they were beaten 1-0 by Middlesbrough.

Teenage midfielder Hannibal has been playing for Tunisia at the FIFA Arab Cup over the last fortnight. The Eagles of Carthage have managed one win and one defeat so far and need a result against the UAE in their final group game to progress. The experience of an international tournament of such significance is fantastic for one of our players.

COMING UP THIS WEEK

The Under-19s host Young Boys at Leigh Sports Village. Kick-off is at 15:00 GMT. An away win a fortnight ago against Villarreal means United have already qualified for the knock-out rounds.

There's no league action for either the Under-18s or Under-23s this week. The Under-18s host Scunthorpe United in the FA Youth Cup next Monday. Kick-off is at 19:00 GMT and fans are encouraged to attend and support the team. Tickets are free and are available here. No tickets will be available at the ground on the day of the game and must be bought before 9:00 AM on Monday, 13 December.