The Fiver | Everton’s decline, the first sacrificial lamb and a 27th-minute walkout
The Guardian 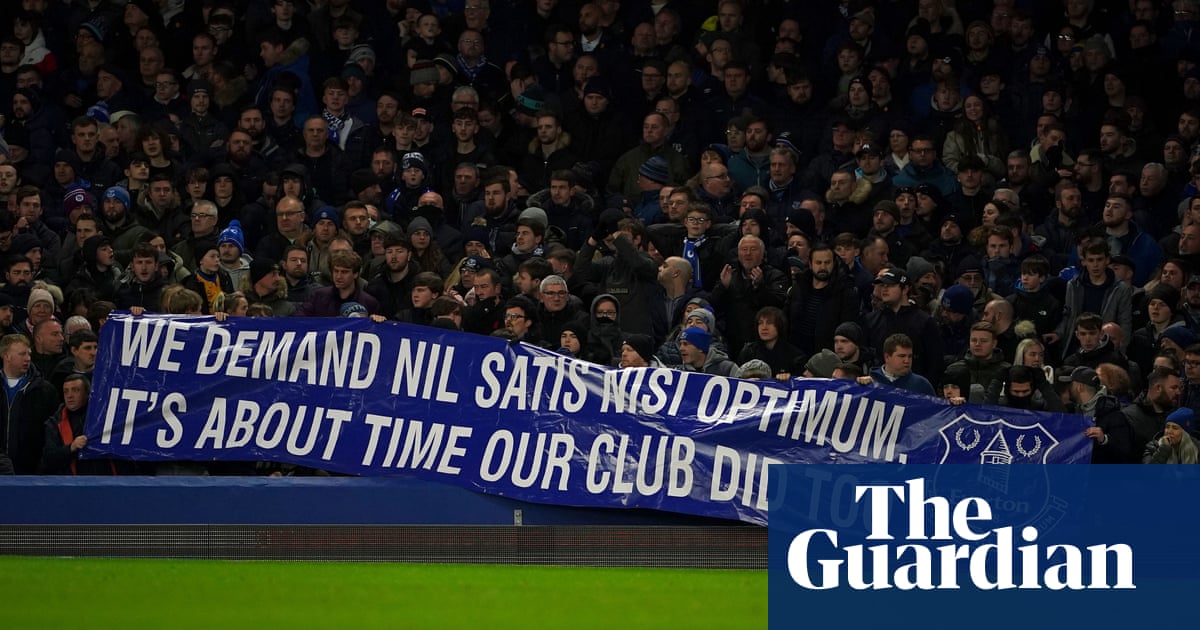 “It costs a lot of money to look this cheap,” Dolly Parton once said, and it is a quotation that may resonate with Everton fans as they click through the Goodison Park turnstiles tonight before their team’s match against Arsenal. Since Farhad Moshiri took control of the club five years ago, the thick end of £500m has been spent on players, who between them have somehow combined to make the grand old team demonstrably worse.

Despite the best attempts of five different managers, two of them highly decorated and among the best in the business, the seventh-place Premier League finish Everton once considered their birthright in the pre-Moshiri era is currently little more than a pipe dream. As for delusions of Big Cup or Euro Vase grandeur? Well, they’ve been quietly shelved as Rafa Benítez’s side try to arrest their inexorable slide towards the drop. Yes siree, as Dolly might say, it has cost Everton an eye-watering sum of money to become the fifth-worst team in the league and last night the first lamb was sacrificed at the metaphorical altar as their director of football, Marcel Brands, left the club.

“The board and I agreed that there is a clear difference in the vision and direction for this beautiful club and, with that in mind, the decision was taken,” said Brands, who had inked a new three-year deal just seven months ago. “I want to wish all of the squad every success, and I am convinced that there is enough quality to improve the current situation quickly.”

Everton fans are unconvinced and some supporter groups are planning a protest at tonight’s game, although it remains to be seen how many will take part or what exactly it is about their free-spending owners, proven trophy-winner of a manager and array of very expensive players they are protesting. Entitled #27minutesfor27years, the planned protest references the number of years Everton will have gone without a trophy come the end of this season and fans are encouraged to walk out of Goodison Park in the 27th minute, a full eight minutes later than it took many of them to abandon ship during their recent drubbing at the hands of Liverpool.

Tired of the chaotic behind-the-scenes activities they believe to be to blame for the current on-field shambles, those behind #27minutesfor27years want Moshiri to keep spending money but instigate a boardroom cull, stop communicating club business through favoured Scottish talk radio presenters and give them some face time so they can voice their concerns in the hope all concerned can get more bang for their emotional and financial buck. Fan reaction to the planned protest has been predictably mixed and if the current squabbling on various social media websites is anything to go by, those behind the #27minutesfor27years show of dissent may discover their fans are no better at singing from the same hymn sheet than the very people they are railing against.

QUOTE OF THE DAY

“How many human rights violations will it take before the football community unites to demand better protection for migrant workers?” – Tromsø ask a question that shouldn’t have to be asked as they release a kit featuring a QR code that takes those who scan it to a page of information listing concerns about the Human Rights World Cup.

The kit is being promoted by Malcom Bidali (above) a former migrant worker and labour activist who was arrested in Qatar for writing about conditions there. Photograph: Tromsø IL

Join Rob Smyth from 7pm for hot updates of the FA Cup third-round draw before he slides smoothly across his home office for MBM coverage of Everton 1-2 Arsenal from 8pm.

Get your ears around Football Weekly, here.

“The way Antonio Conte so powerfully hugs Tottenham players worries me. I don’t know if he realizes that a great number of them can be, mentally and physically, as easily burst as egg yolks, and that a better strategy might be patting them delicately on the head, duck-duck-goose style” – Seth Kleinschmidt.

“I am hoping for some first-half capitulations by Manchester United followed by incredible second-half performances so we can enjoy headlines like: ‘Rangnick rang necks’ or ‘Rangnecks’ etc, etc. Of course, with no second-half revival it could just be ‘Rang out of ideas’” – Andrew Want.

“I had the radio on yesterday afternoon while doing the Sunday dinner dishes and it struck me that Leicester’s Dewsbury-Hall has to the Premier League footballer who sounds most like a northern tourist attraction” – Daniel Kennedy.

“So drunken and drugged-up drunks tried to storm Wembley? Good thing you have better security on a football arena than we have on our Capitol building here in the States! You know, the one that you guys burned down once” – Pat Condreay.

“I was watching Man City. Of course, they are brilliant. But are they the smallest side in the PL era? Does anyone know? Does anyone care?” – Jonathan Tasker.

Send your letters to the.boss@theguardian.com. And you can always tweet The Fiver via @guardian_sport. Today’s winner of our letter o’ the day is … Seth Kleinschmidt, who bags a revised and updated version of Richard Foster’s Premier League Nuggets. We’ll give a copy away every day this week, and it is available to buy here.

Joey Barton has been found not guilty of assaulting former Barnsley manager Daniel Stendel, who was left bloodied and with a broken tooth after an incident at Oakwell in April 2019.

Fifa has been urged to intervene in the case of Abdullah Ibhais, a former employee of Qatar’s World Cup committee who is on a 21-day hunger strike after being detained by police in Doha, otherwise its human rights policy will not be “worth the paper it is written on”.

Emma Hayes praised two-goal Sam Kerr for powering Chelsea to Women’s FA Cup glory and a domestic treble, to boot. “There was no way she was going to be on the losing team,” cheered Hayes. “She sets that tone in such a way that I’ve rarely seen.”

Ralf Rangnick was pleasantly surprised by how useful his Manchester United side were against Crystal Palace. “What they showed was more than I expected,” he honked. “I was positively surprised by the physical state and intensity.”

$tevie Mbe says he won’t be making his return to Anfield as Aston Villa boss all about him. “If other people choose to, that’s their business,” he blabbed, teeing Friday’s Fiver up nicely, “but for me, it’s about getting the team prepared.”

Leeds director of football Victor Orta’s lid almost rattled off his head as he flicked interesting signs and yelped fruity language at a fan following Patrick Bamford’s late equaliser in the 2-2 draw with Brentford.

And John McGreal has taken Rangnick-style interim charge of Ipswich after Paul Cook was mutually consented out of the door marked Do One at the weekend.

Get your eyes on this fantastic gallery of pictures from the master sports photographer Gerry Cranham.

The critically acclaimed Guardian top 100 is back, and Rich Laverty has everything you need to know about how we ranked the 100 best female footballers in the world.

Things are turning sour for José Mourinho at Roma, and Nicky Bandini points out that reminding everyone of his €7m net salary after the defeat to Inter may only encourage his critics to ask whether he is offering value for money.

Fred might have delivered what looked like a fresh start for both him and Manchester United, but don’t read too much into the 1-0 win over Crystal Palace, writes Jonathan Liew.

Brest have been the best in their past six matches after an incroyable run of wins, yelps Ligue Urrrrn aficionado Eric Devin.

Divock Origi being the man for the big occasion, Leicester’s problems and Oliver Skipp’s growing importance are just three of these 10 talking points from the Premier League’s weekend action.

And if it’s your thing … you can follow Big Website on Big Social FaceSpace. And INSTACHAT, TOO!

GIFT IDEAS THAT ARE TOO PRICEY FOR OUR WEIRD UNCLE