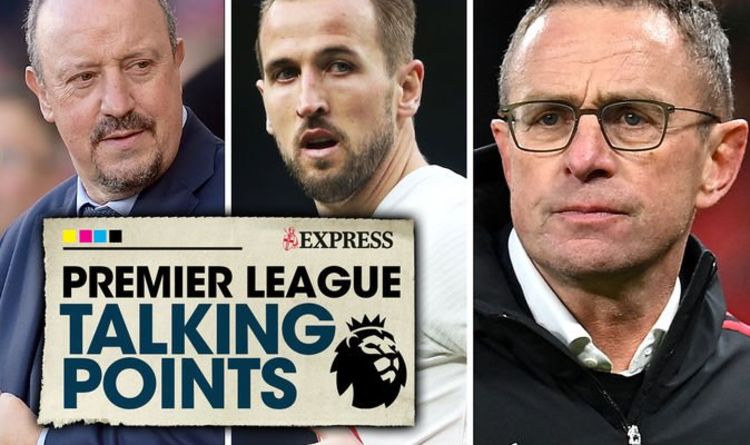 Initial signs are that Ralf Rangnick will struggle to drill his new philosophy into the United players in the midst of the annual fixture crisis and by the time they get a clear pre-season he is supposed to be moving upstairs. Sounds like the kind of missed opportunity Harry Kane is now suffering from. If only the Spurs striker had some of the belief that Benitez enjoys.

It was a suitably hard-working but largely unconvincing start for Ralf Rangnick’s Manchester United era with Fred’s late goal brushing over a lot of work that needs to be done on the training field at a time when games are coming thick and fast.

The festive period is a tough time for any of the United players to be getting up to speed and there was already a drop-off in unaccustomed energy levels by half-time yesterday.

Ironically, the thing that would really get the Rangnick system to bed in would be a full pre-season.

And that’s the one thing the dithering Manchester United board look destined never to give him with his employment situation.

KANE CLOSE TO BEING MORE ABLE

On the plus side, Antonio Conte has come in and is beginning to solve the problem of Harry Kane not getting any chances - upping his shots per game ratio by 54 per cent.

Now all he has to do is find a way for the England captain to start taking those chances again.

With Tim Krul stranded and Kane 35 yards out on Sunday, a confident striker would have stroked the ball into the empty net without a second thought. After all, the timing of the run to earn him the chance had been instinctive enough.

A bit more of the old belief and finally he will be there again.

Rafa Benitez left Liverpool in seventh, took treble-winning Inter Milan to sixth in Serie A by Christmas, led Napoli out of the Champions League positions and was third in the annual Liga 1 two-horse race with Barcelona when the fans got fed up with him.

He had roughly the same statistics as the much-maligned Steve Bruce at Newcastle.

And yet he has won another battle at Everton with the departure of Marcel Brands with the clear message that recruitment is the reason behind the Toffees’ poor season.

Jose Mourinho - linked with the Everton job - must wonder how he has the reputation of living on past glories.

HAMMERS REFUSING TO FADE AND DIE

Chelsea have now joined Liverpool and Spurs in dropping points there. Manchester City and Manchester United lost their places in the EFL Cup against them.

Or maybe, just maybe, it is something that West Ham deserve a bit of credit for.

Somehow David Moyes is keeping them in fourth place and in with a sniff of silverware on a threadbare squad bolstered by an incredible academy product in Declan Rice and two far-from-blank Czechs in Tomas Soucek and Vladimir Coufal.

Chelsea went to the London Stadium knowing they had a battle on their hands but even with Jorginho back in the side, West Ham out-fought them. Bravo David Moyes.

It’s all Gary Crosby’s fault. Ever since he nodded the ball out of Andy Dibble’s palm, football’s lawmakers have been giving goalkeepers more and more protection.

So like it or not, and despite the Twitter debate and incredulous analysis of the Match of the Day pundits, Michael Oliver and the VAR were right in applying the spirit of the Law correctly, even if the wording confuses the issue more than it helps.

Interestingly, though, the officials in Stockley Park do not actually have at hand a copy of the Laws to reference - they rely instead on a Neil Swarbrick to oversee the correct application of the rules.