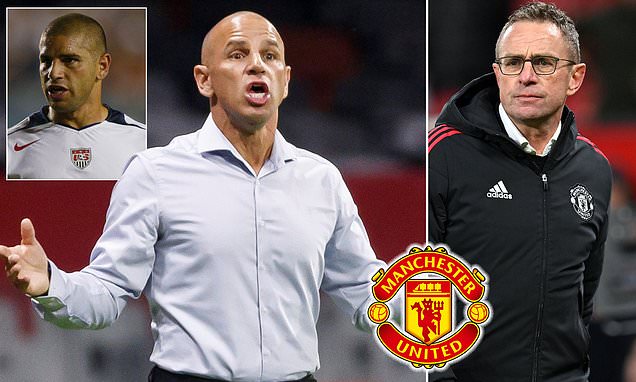 Armas was fired by Toronto in July after less than six months in charge. During his time at the helm, Toronto suffered a 7-1 defeat to D.C. United – the worst margin in the club's history.

Nevertheless, Armas will look to redeem himself at Manchester United after being recruited as the first new member of Rangnick's backroom staff.


One big advantage to the move is that Rangnick and Armas already know each other, after previously working together at the New York Red Bulls.

Rangnick was the head of sport and development for Red Bull’s clubs in New York and Brazil while Armas was appointed as the head coach of the American team.

Born in New York, Armas played football while studying at Adelphi University in his home city between 1990 and 1993.

Following his graduation, he began his professional career with the Long Island Rough Riders before being picked by up by Major League Soccer side LA Galaxy in a draft in 1996.

Armas played for the California outfit in their first two seasons in the division but was traded to Chicago Fire in 1998. He immediately helped his new side win the MLS Championship.

A talented midfielder, he would go on to spend nine years in Chicago and was named in the MLS' best XI five times before hanging up his boots in 2007.

Armas became assistant manager at Chicago Fire in 2008, before a four-year spell as head women's soccer coach of the Adelphi Panthers – his old university team.

He made the move back into the professional men's game in 2015, joining New York Red Bulls as an assistant before replacing Jesse Marsch as manager in 2018.

It was during his five-year spell that he met and worked with Ralf Rangnick, who has held various roles in Red Bull's football department since 2012. He was promoted to their head of sport and development in 2019, which involved working with Armas and the New York team.

Armas left the New York Red Bulls in 2020 and had a spell out of the game before being appointed by MLS side Toronto earlier this year.

He did not last long in the role, however, and was sacked in July following a 7-1 defeat by DC United, having lost eight of his 11 matches in charge.

According to ESPN, Armas was given his work permit on Monday morning after initially being denied for not having a UEFA Pro License.

Having won his appeal, Armas will now line-up alongside Rangnick in the Manchester United dugout as the German's assistant manager.

This is a huge opportunity for Armas who has been out of work since being fired by Toronto.

But, the American will need to prove himself to the Manchester United faithful - having recorded one win, two draws and eight losses in MLS.

As a result, the American side found themselves bottom of the table - having suffered six consecutive defeats - before Armas was given his marching orders.

Nevertheless, Armas did enjoy a successful spell at the Red Bulls - registering a 29-21-11 record.

He has also enjoyed a successful career as a footballer himself - featuring in 264 matches for the Galaxy and Chicago Fire.

Armas also earned a total of 66 caps for the U.S. men's national team.

Rangnick previously said he would retain the majority of the club's current backroom staff 'because I need their experience and expertise.' However, he did say he would hire 'one or two' additional staff members.

Speaking at his first press conference, Rangnick said: 'I am more than happy to work with the current coaching staff because I need their experience and expertise regarding the current squad.

'I will obviously try to find one, two, maybe three people who can join us in the next one or two weeks but due to the Brexit regulations it is not that easy.

'Many of my former colleagues, no matter if it is video analysts or assistant coaches, are in long-term contracts with big clubs, so they are not available right now. We have to be a little bit smart and clever and find the right people.

'I hope that we can get them in here in the next one or two weeks but I cannot tell you any names.'

Additionally, Manchester United could face paying out millions to the current backroom staff if Rangrick decided to oust them.

Sources also disclosed that he was followed by the rest of the coaching team, including first-team coach Kieran McKenna and goalkeeper coach Richard Hartis.

Meanwhile, Michael Carrick made the decision to leave Manchester United following his final game as temporary manager of the club.

The club confirmed the news in a statement on their official website, in the immediate aftermath of their 3-2 victory over Arsenal earlier this month.

Speaking of Carrick's departure from the coaching staff, Rangrick said: 'Michael, I got to know this two days ago.

'I met with Michael and with Kieran (McKenna) but especially with Michael two days ago, I had a long private conversation with him for more than an hour. I was trying to convince him to stay on board but he had obviously taken that decision weeks ago that he needed a break and a rest after thirty years in professional football.'

While Carrick said: 'It's not been an easy decision to make but I feel it's the right one.

'I was going to take time off after I finished playing and it never happened. It feels like the right time to step away and what a way to finish.

Armas only last six months in his role with Toronto, having been fired after their  7-1 defeat to D.C. United – the worst margin in the club's history

Nevertheless, he will work alongside Rangnick to guide United to the end of the season

'It's 100% my decision. Over the last week I was conscious I respected the club and the manager coming in. I thought it was the right thing to do for the club and for Ralf [Rangnick] and I'm quite happy with that.

'We were in a situation where there was a responsibility to see these games through. The loyalty to Ole is a little bit of a factor but there were a lot of things that came into my decision.

'I've had great times, great memories and I'm proud of the players over the past three games.

'I just told them and they were a bit shocked and surprised, a bit emotional in the changing room. I held it together just about. It's not been easy to keep it away from people but I had a job to do.'