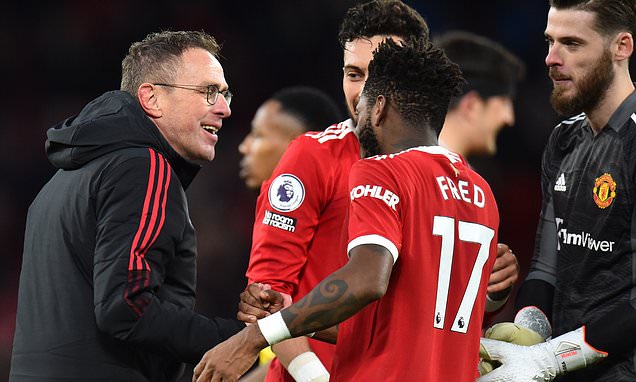 Ralf Rangnick displayed his meticulous attention to detail following Manchester United's win over Crystal Palace as he pinpointed mistakes by both Fred and Scott McTominay.

Both the Brazilian and the Scotsman looked assured as United kept their first cleansheet at Old Trafford this season, and the interim boss was quick to heap praise on their defensive showing.

However, the German was also keen to stress the importance of sticking to his requests and pinpointed moments in the match where the pair had failed to heed his instructions.

Rangnick had instructed his side to avoid playing square passes, with the team playing a narrow 4-2-2-2 formation and the possiblity of a counter-attacking Palace side able to seize on a loose square pass part of his thinking.


As a result, the 63-year-old was disappointed to see both players execute square passes during the game, and he made sure to mention it in his post-match media briefing, in the hope it well help drill the practice out of the two midfielders.

'If you play the way that we played today, with regard to intensity, being on the front foot, playing very proactively, and having four offensive players ahead of Scotty and Fred - with Jadon, Bruno, Cristiano and Marcus - it's highly important that you have players who are very disciplined, who are proactively aggressive against the ball,' Rangnick told reporters.

'And both Scotty and Fred are almost perfect defensively on that. They did one or two or three mistakes, especially in the first half there were two square passes - one from Scott, one from Fred.

'I don't like those kinds of balls in midfield in those positions. But overall, when the other team is in possession of the ball, both Fred and Scotty they are almost perfect for that kind of football.'

However, the German admitted he was not happy with 'square passes' from Fred and Scott McTominay (above)