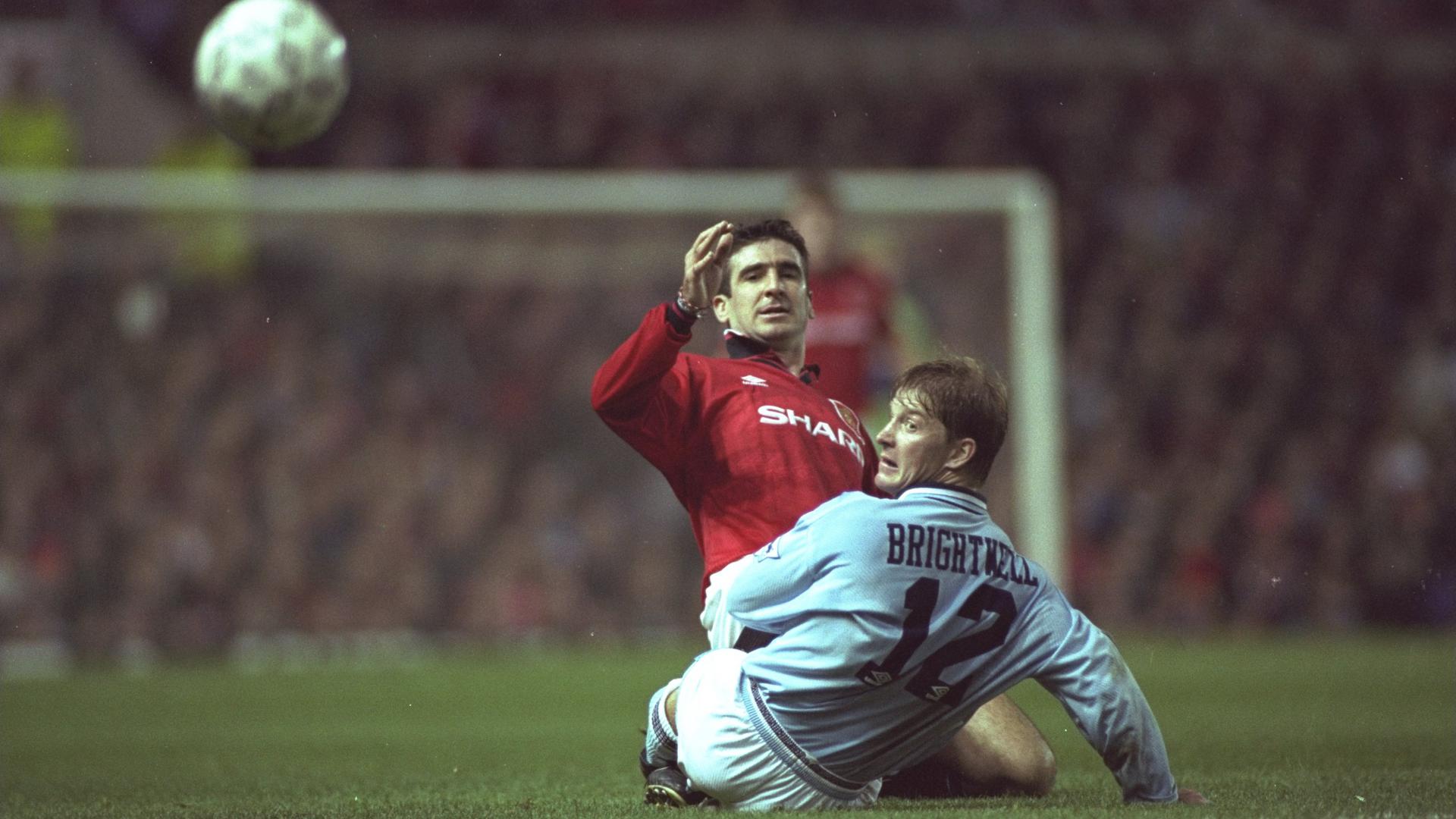 Though greeted by an almighty cheer from a capacity crowd, the Frenchman’s first Old Trafford introduction, 10 words from stadium announcer Keith Fane, did little to hint at the opulence and grandeur in store for the years ahead.

Some 25 years ago, midway through a 2-1 Manchester derby victory, the French striker was introduced without warning as a half-time replacement for Ryan Giggs. The Welshman had injured his left foot during a frenetic, tackle-strewn first period, prompting Alex Ferguson to turn to a player who, 10 days earlier, had been the emblem of Leeds United.

Three months prior to that, Cantona had opened the 1992/93 season with a Charity Shield hat-trick for the Whites against Liverpool. He went on to notch the first hat-trick of the Premier League era, against Tottenham a fortnight later. All was not well, however, with the Frenchman increasingly marginalised by Leeds manager Howard Wilkinson.

Watch a short clip as Eric Cantona comes on for his United debut.

Press reports cited the combustible Cantona – aged 26 and already at his seventh club – as having itchy feet once again. Cantona had briefly retired a year earlier while at Nimes, following an altercation in which he threw the ball at a referee. When he was summoned to French Football Federation to hear his punishment, Eric reacted to the one-month ban by shouting “idiot” in the face of each panel member, one by one.

After nine calm months in Yorkshire, something was simmering again. Over at Old Trafford, Ferguson’s United were struggling, gripped by the neurosis of the previous season’s capitulation which had allowed Cantona and his cohorts to nab the last ever First Division title. On 21 November 1992, a 3-0 home win over Oldham Athletic ended a four-game run without a goal, and followed early exits from the UEFA Cup and League Cup.

Four days later, Ferguson was amid discussions with chairman Martin Edwards. Sheffield Wednesday had emphatically refused to countenance a £3.5 million bid for striker David Hirst, leaving the Old Trafford power duo to discuss increasing an already British-record offer, or sourcing alternative targets. By coincidence, Leeds United chairman Bill Fotherby then called Edwards to enquire about the availability of Denis Irwin. That was rebuffed, and while Whites striker Lee Chapman cropped up in the ensuing conversation, Ferguson impulsively urged his chairman to enquire about Cantona, who had been omitted from the previous weekend’s squad to face Arsenal.

Fotherby, mindful that the Frenchman had not only fallen out of favour with manager Howard Wilkinson but was also due a £500,000 payment if he remained at Elland Road much longer, later admitted: “I said absolutely no way and that it was impossible. But obviously I knew what Howard felt about him, and I knew this additional payment was due."

An hour later, Fotherby returned Edwards’ call and the deal was swiftly agreed. The transfer was completed after lunchtime the following day, and the striker was unveiled at a hastily scheduled Old Trafford press conference.

‘Manchester United manager Alex Ferguson could hardly disguise his delight as he paraded Eric Cantona, his dramatic £1.2 million capture from Leeds, at Old Trafford today,’ described the Press Association’s Rob King. ‘Despite Ferguson’s thick Glaswegian tones and Frenchman Cantona’s halting English, the smiles on both men’s faces needed no interpreter as they met the media.

Elland Road fans are in mourning at the loss of their French favourite; Old Trafford is cock-a-hoop at the audacity of the cross-Pennine raid. “He has the style, skill and arrogance which will delight our supporters,” beamed Edwards. “The signing represents a coup for Manchester United and their supporters. There are not many names in the English game that set pulses racing, but Eric is certainly in that category.”

An equally delighted Ferguson assured reporters: “He’s joining a big club with a big staff and he will play in front of the biggest crowds. It is well known in the game that I only sign players who are keen to join my club. I was delighted, therefore, that Eric did not hesitate nor did he wish to talk to anybody else. Nor did he try to bounce any other clubs’ names off against ours. He was as keen to sign for us as we were to obtain his signature. It is all made for Eric and we feel sure he will thoroughly enjoy the United style of play. I always talk to my staff before signing players and I can assure you nobody attempted to cast doubt on this one.”

Eric Cantona is officially unveiled as a United player.

Over at Elland Road, Wilkinson remained confident that he had done the right thing. “I can tell all the fans that what happened was in the best interests of Leeds United,” he said. “I hope that people don’t allow themselves to be whipped up and forced into doing and saying silly things.”

Leeds season-ticket holder Lawrence Gordon tended to disagree. “There are going to be riots at Elland Road over this,” he warned French news agency AFP. “People have paid for their season tickets and they are going to want their money back. He was the one everyone paid their money to see. I can’t believe Howard Wilkinson would sell him, especially to Manchester United.”

The whirlwind nature of the deal was precipitated by United just missing the deadline to register Cantona for the following day’s Premier League trip to Arsenal, then jetting out to Portugal immediately after the game to meet Benfica in a match arranged to celebrate Eusebio’s 50th birthday.

“Cantona watched from the stands while his new Manchester United colleagues did all they could to make him know that at Old Trafford, as at Elland Road, his first-team place may not be guaranteed,” noted The Independent’s Norman Fox, as Mark Hughes’s solitary goal at Highbury gave the visitors a richly deserved and impressive away win.

While putting to bed rumours that Newcastle were preparing a bid for Hughes following the Frenchman’s arrival – “What would be the point?” – Ferguson struck a cautious note after seeing his side’s excellent play against the Gunners.

“Eric himself will have seen that this is a difficult one for me,” said the manager. “It’s never easy, but these are the kind of decisions which have to be made. I’ll see how it goes in Lisbon on Tuesday and take it from there. I just hope I do the right thing.”

The Scot fielded his new signing for 90 minutes in the Estadio da Luz friendly, with Cantona spending 45 minutes apiece in tandem with Hughes and Brian McClair. While 20-year-old Rui Costa notched the game’s only goal for the hosts after 81 minutes, Cantona’s elegant debut flickered with glimmers of what was to follow: flicks, neat touches and vision, plus a booking for hacking down Benfica’s Abel just outside the United area.

“I thought the ref might have let that one pass,” smiled Ferguson, who was pressed for clues over his team selection for the looming derby, scheduled for five days later. “We now have a competitive edge for places up front, and that’s why I bought Eric,” he countered. “But after Saturday’s win, which was our most satisfying performance of the season, I honestly don’t know how I can fit him in against Manchester City next Sunday.’’

Sure enough, Cantona had to be content with a spot on the bench, watching on intently as Paul Ince thundered United into an interval lead. Giggs’s injury prompted his introduction, however, and he trotted out of the Old Trafford tunnel with his new team-mates to a huge ovation, before attentions immediately switched to the consuming matter of the derby.

A new era had begun, but one of the club’s oldest rivalries took precedence. Wandering about the field in search of involvement, Cantona popped up on both wings and down the centre as he sought to wreak his influence on proceedings. Aside from one excellent cross which Hughes headed over, the Frenchman was once again restricted to flashes of inspiration. Hughes cracked home a stunning clincher and, after Niall Quinn had quickly halved the arrears, United were indebted to a breathtaking double save from Peter Schmeichel in holding on for a gritty 2-1 win.

Cantona’s role in a blood-and-thunder derby win was merely a footnote on the day, but would ultimately mark the start of a new headline act at Old Trafford. “The Frenchman played a peripheral role,” observed The Guardian’s Stephen Bierley, before adding, with the most understated of prescience: “His time may come."