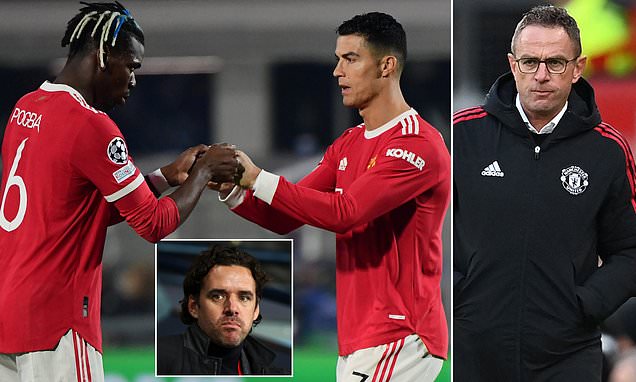 Owen Hargreaves believes Paul Pogba could have a significant role to play at Manchester United when he returns from injury, and has claimed the 28-year-old may be the player to get the best out of Cristiano Ronaldo.

Pogba started the campaign in stunning form, delivering seven assists in his first four Premier League appearances, including four in one match against Leeds.

However, his performances tailed off thereafter, and he was dropped from the starting line-up by Ole Gunnar Solskjaer for consecutive home matches in October, prior to suffering a thigh injury on international duty with France later that month.

It was all smiles for Paul Pogba at the start of the season, but his form dipped prior to his injury

He has not played since, but plenty has happened at Old Trafford while he has been out of action. Solskjaer has been replaced in the dugout by interim boss Ralf Rangnick, who got off to the perfect start when Fred scored the winning goal to hand United a 1-0 win over Crystal Palace on Sunday.


Hargreaves was encouraged by the side's display against Patrick Vieira's men, but still feels Pogba would add something to the team when he is ready to play again.

'If Pogba plays instead of, say, Fred or McTominay and United are playing in one half, then you've got another guy that can play a pass into Cristiano Ronaldo', Hargreaves told Premier League Productions, as quoted by The Mirror.

'So I thought they played okay, but Marcus (Rashford) was really quiet today, Bruno (Fernandes) was pretty quiet today.

'Getting those guys, (Raphael) Varane and Pogba, into the side, United have easily one of the strongest teams in the Premier League, but they need to start playing like it.'

Pogba is due to remain sidelined until 2022, so it will still be some time before Rangnick can consider utilising him in his side.

The German coach opted for a 4-2-2-2 formation on the weekend, and, if he continues with this system, he would have to weigh up whether Pogba would be best suited to playing in a deeper midfield role, or higher up the pitch where he can try to link up effectively with the front two.

There is also the small matter of the World Cup winner's contract, which is set to expire in the summer.

It had been expected that Pogba would depart Old Trafford, although the arrival of Rangnick has convinced him to stay beyond the January transfer window at least.