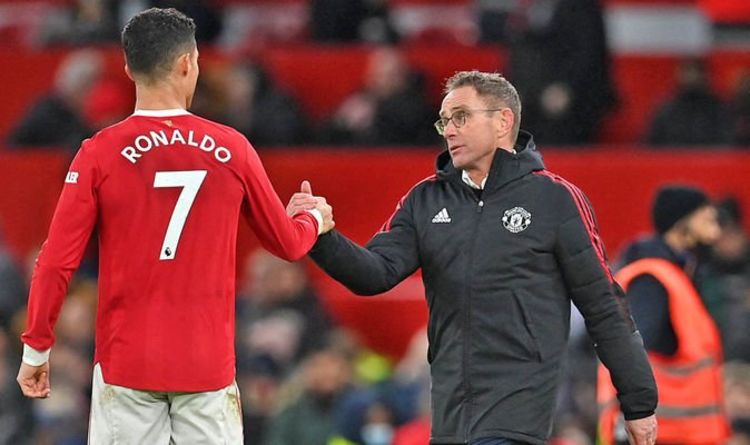 Cristiano Ronaldo has reacted after Manchester United beat Crystal Palace on Sunday to give Ralf Rangnick the perfect start to his time at Old Trafford. The Red Devils went into the game on a high after edging out Arsenal in midweek. And they secured consecutive Premier League wins for the first time since September with victory over Patrick Vieira’s team.

United have been improving of late, winning three of their last four matches since the sacking of Ole Gunnar Solskjaer.

Victories over Villarreal and Arsenal, with a draw against Chelsea in between, had lifted the mood before Sunday’s match with Crystal Palace.

And United continued their recent resurgence with a narrow 1-0 win to give Rangnick the perfect start to his time as manager.

The 63-year-old was visibly delighted as Fred struck the winner, with the Brazil international finding the net for just the fourth time since arriving in 2018.

Ronaldo was unable to score, having previously been a doubt for the match.

Yet he was happy in the aftermath of the fixture, with the Portugal international taking to Instagram to react to the result.

“I was positively surprised by the physical state and intensity, the first half-hour was amazing, I felt it was extremely high-tempo, high intensity, always on the front foot.”

Ronaldo was singled out for praise, with Rangnick adding: “What Ronaldo did today ‘against the ball’: chapeau.”

And the German also elaborated on his decision to stick with the same team who beat Arsenal last time out.

“It was logical not to change too many positions after the win,” he said.

“Everyone was fully fit, recovered. The question was how to get pressure, control, so I decided on 4-2-2-2, Cristiano [Ronaldo], Marcus [Rashford] in attack, Jadon [Sancho] and Bruno [Fernandes] in the two 10 positions.

“And we had enough space with Bruno and Jadon for our full‑backs to play forward on the wing and they almost played like wing‑backs.

“The most challenging, demanding positions in that formation are the two 10s.”