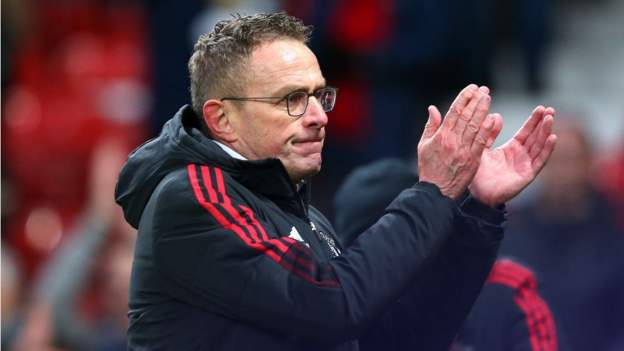 In his early days as Manchester United's interim manager, when eight games in 30 days make it virtually impossible to start implementing some of his more complex ideas, Ralf Rangnick has made getting control in matches the priority.

It was ironic, therefore, that a player who is the epitome of haphazard play should secure three points on the German's debut in the Old Trafford dugout.

Fred is a harum-scarum kind of player, someone who, to the untrained observer, tends to dash about with no obvious purpose.

Three Premier League goals in 86 appearances before his excellent winner in the 1-0 victory against Crystal Palace - and nine assists in 137 appearances in all competitions - is not the haul of an influential presence from an offensive perspective. Even defensively, when things are going against United, the Brazilian tends to be the target for derision.

Yet Michael Carrick, as Ole Gunnar Solskjaer did before him, showered Fred in praise last week and, realistically, if Rangnick is to make any significant progress between now and the end of the season, the midfielder will be a major factor.

"If you play the way we did with regard to intensity, being on the front foot, playing proactively and having four offensive players, it's highly important you have players behind who are very disciplined and proactively aggressive against the ball," said Rangnick. "Scotty [McTominay] and Fred are almost perfect defensively."

Fred has scored twice in 12 Premier League matches this season, as many as he scored in 76 appearances in his first three seasons in the competition

The significance of Fred's fine goal to United's hopes of a successful transition, out of the Solskjaer era and into Rangnick's, cannot be underestimated.

Results allow statistics to be massaged in a positive or negative light and it should be noted Crystal Palace won on their previous two visits to Old Trafford with 24% and 29% possession. This time they had 39%.

For United there was clearly a change in approach under Rangnick, particularly evident in the first half, despite the manager naming the same side used by Carrick against Arsenal in his final game in caretaker charge.

Against Palace, a United team criticised for a lack of intent without the ball made a season-high 65 recoveries (gaining the ball where neither team has possession), up from an average of 56.4 so far this term.

In total, United won possession in the final third 12 times - their season average before this game was 4.1. Again, this was their highest tally of the campaign so far.

Fred's strike means those stats can be interpreted positively rather than reflect how the hosts lack a cutting edge. Their expected goals tally was 0.9, down from an average of 1.4, showing they actually struggled to create clear chances despite the tweaked approach.

Crucially, though, this game produced a first Old Trafford clean sheet since April and gave tangible reward as well as space - albeit limited - for Rangnick to make changes on Wednesday. That is when Young Boys visit in the Champions League and allow the players who started against Palace some rest ahead of clearly-winnable trips to Norwich and Brentford and the final pre-Christmas match against Brighton on 18 December.

By then, Rangnick should at least know what he is dealing with.

After the storm, the skies have now cleared

There was nothing hugely significant in the 63-year-old's behaviour on Sunday.

Jurgen Klopp is a disciple but the Liverpool boss evidently did not get his pre-match tradition of observing the opposition warm-up from his fellow German.

Rangnick was nowhere to be seen as strength and conditioning coach Charlie Owen did the initial work before Kieran McKenna and Darren Fletcher oversaw the more technical aspects of the build-up.

Unlike Solskjaer, Rangnick watches most of the game from the edge of his technical area, retreating for a short period of time every 10 minutes or so. Fletcher came out to offer advice to Alex Telles and Fred in the second half but there was no visible rotation of coaches as tended to happen under Solskjaer.

However, neither was there any Antonio Conte-style micro management. Rangnick was calm throughout and let his players get on with it. There were no notes being made, even though he made quite a few from his seat in the directors' box during the Arsenal game three days earlier.

If there was anything to be gleaned, it was the use of Bruno Fernandes and Jadon Sancho in almost a double number 10 role, behind Cristiano Ronaldo and Marcus Rashford. The idea was to use their creativity from a narrower position, allowing Diogo Dalot and Telles to threaten from wider areas.

To an extent it worked, given Mason Greenwood created Fred's winner 15 minutes after replacing Sancho.

The sight of Ronaldo pressing at the start of the game and chasing back when the victory still needed to be secured at the end did not go unnoticed, although this was not one of the Portuguese superstar's more effective performances.

At the final whistle, Rangnick made a point of going onto the pitch to shake all his players by the hand. He admitted afterwards his celebrations would be limited to a nice meal and a glass of wine given he needs to be back at United's Carrington training ground by 9am on Monday morning to begin preparations for the Young Boys game.

With qualification for the last 16 as group winners already secured, Rangnick said it was 'perfectly possible' he could make some changes, although he is already aware Phil Jones - a substitute against Palace who has not played a first-team game since January 2020 - cannot play as he is not registered.

He will work his plans out at Carrington, where he may also give some thought to picking up the phone to his former coach Jesse Marsch, following his sacking by RB Leipzig.

These decisions can at least be made outside of a crisis situation.

After the storm that engulfed them in Solskjaer's last days at the helm, the skies have now cleared, which at least allows Rangnick to plot a way forward.

There is evidently a long path ahead to get close to Manchester City, Liverpool and Chelsea, who are a class apart, but at least United can see where it is, which has not always been the case this season.