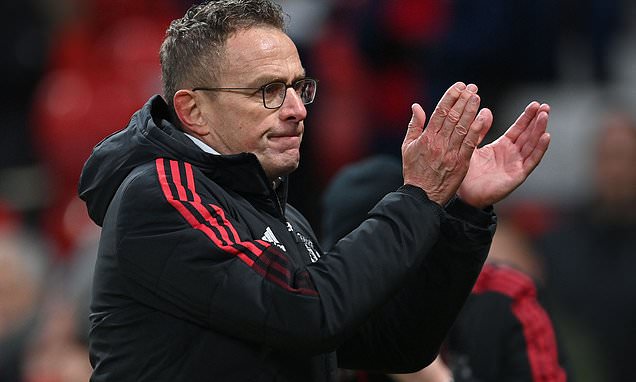 Manchester United's new interim manager Ralf Rangnick said he was impressed with how well his team responded to his input during Sunday's 1-0 Premier League win over Crystal Palace.

A 77th-minute goal from Fred earned Rangnick a victory in his first game in charge at Old Trafford.

United produced a much more aggressive press, in line with Rangnick's preference, in the opening part of the game and although that faded, they kept Palace away from goal for long periods.

'I am very happy with the way the team performed, especially the first half hour, with the pressing, it was exceptional. The only thing missing was the 1-0 or 2-0,' Rangnick told reporters.


'The way we defended, we had control of the whole game, the clean sheet was the most important part. These are the things we must improve. We need to keep clean sheets.

'With just the one training session, I was really impressed. We did much better than expected.

'We always tried to be on the front foot. We were never not apart from maybe the last five minutes. At all other times we were trying to keep them away from our goal,' he added.

Rangnick opted for a narrow system with Marcus Rashford and Cristiano Ronaldo in attack, and Jadon Sancho and Bruno Fernandes operating behind them.

'We wanted to play with two strikers, especially in the central position. By the way, Cristiano Ronaldo's work off the ball, 'chapeau'.'

Rangnick felt he had seen enough positive elements to give him confidence for the future.

'It's always easier to build on things after you're successful. We must produce further clean sheets and get better at creating chances for our attack. Overall, I was very pleased with the way we played today,' he concluded.