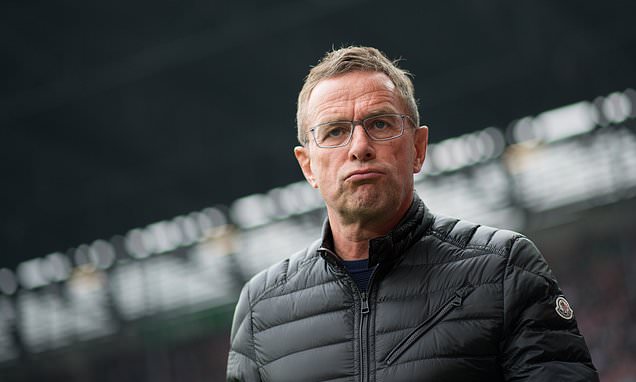 The night the bespectacled nerd in a grey suit and tie took on Der Kaiser of German football, Franz Beckenbauer, there would only be one winner – and it wasn't Manchester United manager Ralf Rangnick.

'Kopfmensch' was one of the more polite terms thrown at Rangnick that night, which translates literally a person full of head knowledge, the implication being that they lack emotional intelligence.

Geek might be the closest word in English. In fairness, he did look a little like an art critic on Melvyn Bragg's South Bank Show, never a good look when trying to win over the football establishment.

Pictured: Rangnick's TV appearance 23 years ago involved the use of a tactical whiteboard

Rangnick, manager at second-tier Ulm, a backwater of German football, had the audacity to go on German TV and explain the tactical revolution his team was implementing and why everyone else was wrong.


This was 1998 and Rangnick, 40, was an up-and-coming young coach explaining to TV viewers why the sweeper system, perfected by Beckenbauer into a German football institution, was outdated.

In fact, he pretty much told the viewers of ZDF Sport-studio that everything German football had ever believed in was now defunct.

Warming to his theme, Rangnick used a tactics board to demonstrate why pressing the ball and using a back four with zonal marking was far superior to man marking and a sweeper system.

'I think we have the problem in Germany that many players have been trained in a completely different way and perhaps that's why it takes a bit longer in Germany to convey that style of football to a team,' enthused Rangnick, a player whose career had peaked in the third division.

'In Germany, it's primarily about being one-on-one with the opponents. But we've seen here that it's often the case that you can be marking somebody but then deliberately move away to close down the space around the ball.'

Rangnick was harshly criticised by many afterwards, including 'Der Kaiser' Franz Beckenbauer

Imagine a young Championship manager back in the day telling Sir Alex Ferguson and Sir Bobby Robson that everything they ever knew was wrong and you have some idea how bold this take was.

Germany had won the World Cup in 1990 under Beckenbauer and Euro 96 under Berti Vogts playing with a sweeper and both of those coaches were central to the 1974 World Cup triumph as players.

These were defining points of German football, their sacred cows.

Sure, they had been embarrassingly eliminated in the 1998 World Cup quarter-finals by Croatia but their record over that decade didn't suggest the national team was screaming out for tactical reboot.

So the backlash against Rangnick was huge. The national team manager at the time, Erich Ribbeck made a pointed reference to the programme when asked what had disappointed him most in his first 100 days in charge.

'I'm disappointed by all these exaggerated discussions about tactical systems, like on Saturday evenings in ZDF's Sportstudio, we got a colleague dishing out platitudes as if every manager was a complete moron,' said Ribbech, quoted in Ronald Reng's Matchdays: The Hidden Story of the Bundesliga.

Beckenbauer concurred. 'All this talk about systems – it's a load of crap. Foreign players can do more with the ball. Ours can't. Back four, zonal markings, libero, it all doesn't matter a damn. The back four is a fatal mistake.'

Put firmly back in his box, Rangnick would regret his appearance. 'It was a mistake,' he told Raphael Honigstein in Das Reboot. 'It was stupid to tell others about my tactics. I was considered a theorist – that was meant as an insult.'

Indeed, there was widespread rejoicing amongst the German football establishment when he subsequently failed in Bundesliga at Stuttgart.

However, Ribbech proved to be the worst German national team ever, his team eliminated bottom of their group at Euro 2000 with one point.

Beckenbauer was found by a FIFA ethics investigation to have breached rules in relation to bribery and corruption, though he will not be prosecuted due to the statute of limitations.