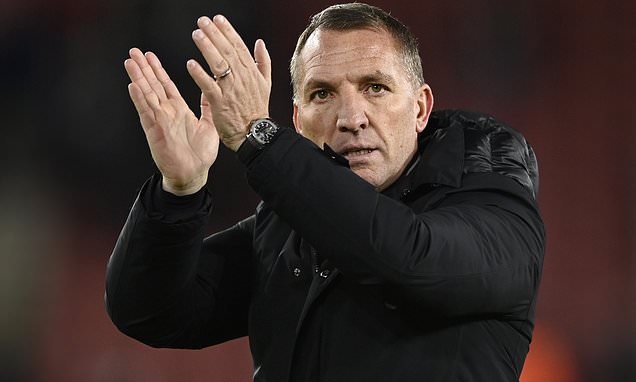 It is a shame for Manchester United that Brendan Rodgers once managed Liverpool. Otherwise I'd see him as the ideal fit to mastermind the long-term project at Old Trafford.

Past associations don't have to be a deal-breaker but they don't help, as Rafa Benitez is finding out at Everton, so Mauricio Pochettino looks the favourite to be in charge next season unless Ralf Rangnick does so well that he has to stay.

Rodgers ticks so many boxes: he has extensive experience but is still young enough to have the hunger and drive to take United forward.

In football, people tend to get judged on their last match rather than a career's work but that's unfair. Leicester's form hasn't been great this season but even with a lengthy injury list they are in the top half and lead their Europa League group.


It's little more than six months since they won the FA Cup, beating Manchester United in the quarter-finals and Chelsea in the final. And twice in a row they've come close to qualifying for the Champions League.

Rodgers knows what it's like to handle the spotlight after managing Liverpool and Celtic. It's exciting to think what he could do with the squad at Old Trafford because his track record at improving players is brilliant. Youri Tielemans and Harvey Barnes are just two examples at Leicester.

Tactically, he's very shrewd. During the season at Liverpool when he nearly won the title, he adapted a 4-3-3 to a midfield diamond in which Raheem Sterling played behind Luis Suarez and Daniel Sturridge. Suarez's form that season is testimony to how Rodgers can handle big players with big egos.

There are question marks over the defensive side of his teams but I'd point out he didn't have the budget at Anfield to sign a Virgil van Dijk or Alisson.

Even Jurgen Klopp struggled a bit before they arrived. Unless you have world-class players everywhere, to a certain extent you must choose whether to focus on your attack or defence. It is hard to do both successfully.

On Sunday Leicester face Aston Villa, managed by Steve Gerrard who will be pleased with the start he has made there.

It's no secret he became frustrated at being left out of some big games by Rodgers at Liverpool but I'm sure there is now a mutual respect between both men rather than any animosity. They had a good rivalry managing Celtic and Rangers and it'll be a fascinating match-up this afternoon.

No disrespect to Aston Villa and Leicester but Gerrard and Rodgers have what it takes to be managerial rivals at Liverpool and United.

United might not go for Rodgers, partly because of his previous job at Liverpool — but I think they should consider taking the risk.