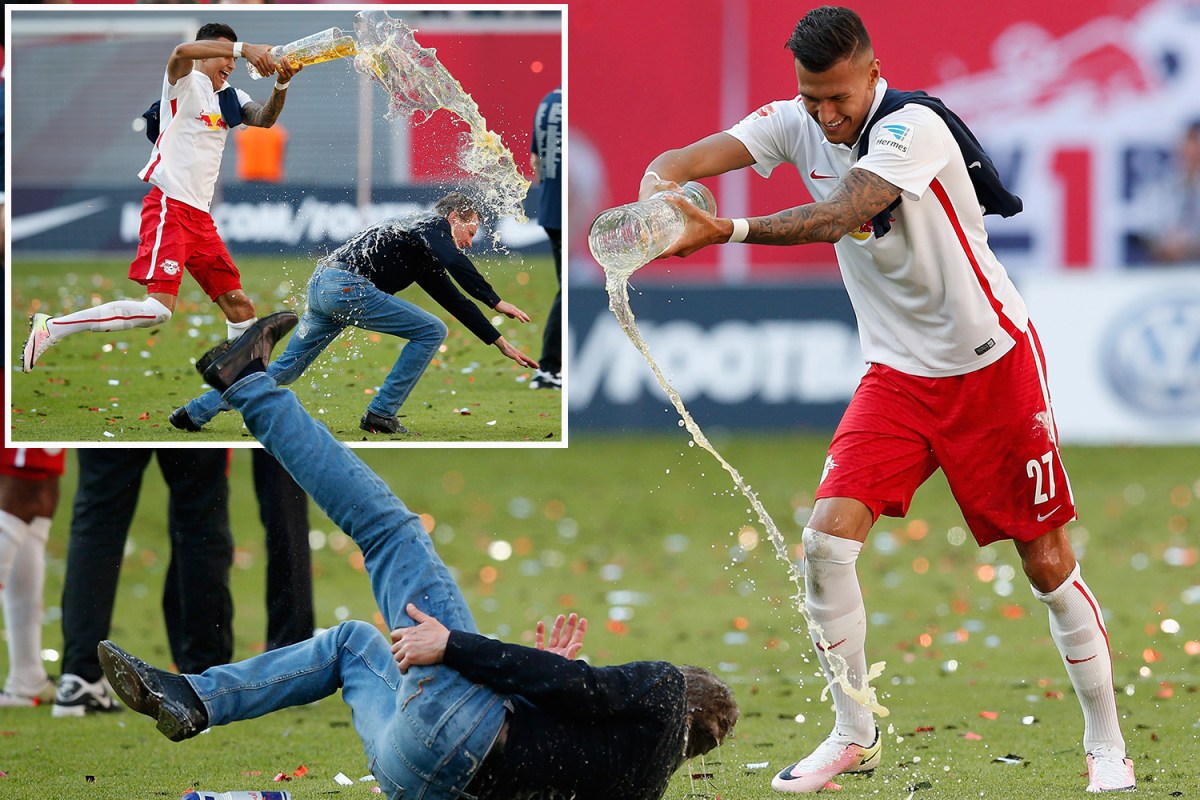 RALF RANGNICK will be desperate to be celebrating with Manchester United come the end of the season - but won't want to pull his hamstring again.

That is exactly what happened when his RB Leipzig players chased him and poured beer on his head in 2016.

Ralf Rangnick was chased with beer after leading RB Leipzig to promotion in 2016Credit: Getty

Striker Davie Selke poured the alcohol all over the German managerCredit: Getty

He pulled up clutching his hamstring as the fun continued for SelkeCredit: Getty

Rangnick was walking gingerly after the sudden muscle injuryCredit: Getty

Rangnick had led his side to second in the Bundesliga 2, confirming their promotion to Germany's top flight for the first time in their history with a 2-0 home win over Karlsruher.

And unsurprisingly there were jubilant scenes at full-time at the Red Bull Arena.

Star striker and top goalscorer Davie Selke closed in ready to shower his boss with a huge glass of lager.

But Rangnick - then 57 - suddenly clutched the back of his leg and fell to the ground, writhing in pain.

Selke was asked if he had talked to Rangnick since but the ten-goal Leipzig hero said: "No I'm too scared.

"That’s why I’m giving so many interviews, so I don’t have to go back to the dressing room.

"He definitely tried to run away from me which isn’t a good idea – I caught him up.

"I won the race then something happened – he probably didn’t warm up enough."

Rangnick will be hoping he can sustain a run of form for longer at Old Trafford.

He takes over with his new team seventh in the table, 12 points adrift of leaders Chelsea, and through to the knockout stages of the Champions League.

They face Crystal Palace at home in his first game in charge on Sunday afternoon - but as revealed by SunSport, the German could be without Cristiano Ronaldo who is believed to have injured his knee celebrating in the 3-2 win over Arsenal.

Rangnick said: "If you look at the total number of goals conceded, it averages almost two per game. This is just too much.

“My approach is to help the team to get more balance, more control of the game.

“The Arsenal match was exciting for the fans but, even for myself as the future coach, those are not the kind of games that we need every day."