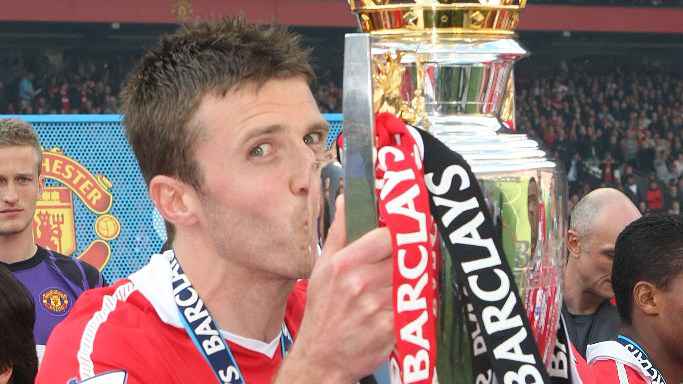 Manchester United legend Michael Carrick spent 15 years with the club and to mark the end of that long and distinguished service, we're recalling some of his greatest moments in the red shirt.

As caretaker boss, our former no.16 guided the team to victory over Arsenal on Thursday evening in what was his last assignment for the Reds. Shortly after the dramatic 3-2 win over the Gunners, an official statement confirmed that Carrick has decided to call time on his United career.

Here we summarise Michael's epic stint at the Theatre of Dreams by looking back at some notable points on his journey...

United acquired Carrick from Tottenham Hotspur in August 2006, when he was handed the no.16 shirt vacated by Roy Keane. The West Ham Academy product would prove to be one of the Reds' most consistent signings of the Premier League era so far.

The midfielder made his first appearance on 23 August 2006, when he came on as a substitute as Sir Alex Ferguson's side won 3-0 against Charlton Athletic at The Valley. Michael's first start followed three days later, in United's 2-0 win over Watford.

Carrick played a big part in one of the most iconic European nights at Old Trafford when the Reds beat Roma 7-1 in April 2007. The midfielder scored a brace against the Italians with his second being the best of the entire bunch. Nothing beats a screamer into the top corner!

Michael's maiden season at the club, 2006/07, was a truly memorable one as we clinched our ninth Premier League title and the first of his five. The midfielder finished the term with 52 appearances to his name, along with six goals and four assists from his control room in midfield.

It’s often said that a player's second season can be the toughest one but for the former Spurs man, that was not the case. Following our second consecutive Premier League title, Champions League glory was clinched in May 2008 with a penalty shootout win over Chelsea in the Moscow final. Carrick was among the players who successfully converted a spot-kick on a historic night.

Michael Carrick helped United to win the Champions League in 2008.

En route to our third league crown in a row, Carrick contributed greatly with a late winner away at Wigan in May 2009. The midfielder came from deep to slice one into the top corner in front of our incredible away supporters. The celebrations said it all and United went on to claim our 11th Premier League title.

"Hard to believe it’s not Scholes!" as the famous song about Michael goes. But comparisons with Ryan Giggs could have been drawn when Carrick dribbled past several Queens Park Rangers players on his way to a magnificent solo goal at Loftus Road in December 2011. A truly wonderful goal by our no.16 as the Reds won 2-0 in the capital.

PLAYER AND TEAM OF THE YEAR

The 2012/13 season is regarded by many observers as Carrick’s finest for United. For his performances in our title-winning campaign, his team-mates crowned him Players’ Player of the Year at the end-of-season awards dinner at Old Trafford. He was also voted into the Premier League Team of the Year as the Reds won a record 13th Premier League title and 20th championship overall.

Michael Carrick and Wayne Rooney with the UEFA Europa League trophy in 2017.

COMPLETING SETS After winning the Premier League, League Cup and Community Shield there was only one domestic trophy left for Carrick to win and that was the FA Cup. In May 2016, our no.16 played the full 120 minutes as the Reds beat Crystal Palace at Wembley to win the world’s oldest club cup competition. In the following season, 2016/17, he helped the club to complete its all-time collection of trophies by adding the UEFA Europa League to his CV with a 2-0 win over Ajax in the final in Stockholm. Alongside Wayne Rooney, he’s the only United player to have won both the Champions League and Europa League for the club, alongside all the English honours.


On 4 June 2017, Carrick was awarded his testimonial at United after eleven years of service to the club. The match between United’s 2008 Champions League-winning team and an All-star XI ended 2-2 with the man himself fittingly scoring a 25-yard screamer.

Following the departure of Wayne Rooney in the summer of 2017, vice-captain Carrick was promoted to club captain, joining the likes of Eric Cantona, Nemanja Vidic, Roy Keane and Gary Neville in having worn the armband during the Premier League era. The following season would turn out to be his last as a player.
SEND-OFF Carrick played his last game for United at Old Trafford against Watford in what was our last game of the 2017/18 campaign. On his 464th and final appearance for the club, our no.16 provided an assist for Marcus Rashford’s winner as we overcame the Hornets 1-0 on 13 May 2018.

Carrick played his final game for United in May 2018.

After hanging up his playing boots, Carrick joined Jose Mourinho’s backroom staff as first-team coach. He retained that role under the management of Ole Gunnar Solskjaer and was therefore in the dugout when the Reds reached the Europa League final again, at the end of the 2020/21 campaign.

Following the end of Solskjaer’s reign as United boss on 21 November 2021, Carrick took temporary charge of the team. He started with a win away at Villarreal in the Champions League before claiming a solid away point against league leaders Chelsea a few days later.

In his third and final match as caretaker boss, the Reds beat Arsenal 3-2 in a dramatic Premier League affair under the Old Trafford floodlights, watched by the incoming interim manager Ralf Rangnick. Ten minutes after the final whistle, Carrick's decision to leave the club was announced.

Everyone at Manchester United would like to wish Michael all the best for the future. He'll always be a true Reds legend.