Ralf gets to business! Rangnick puts his squad through their paces
Daily Mail 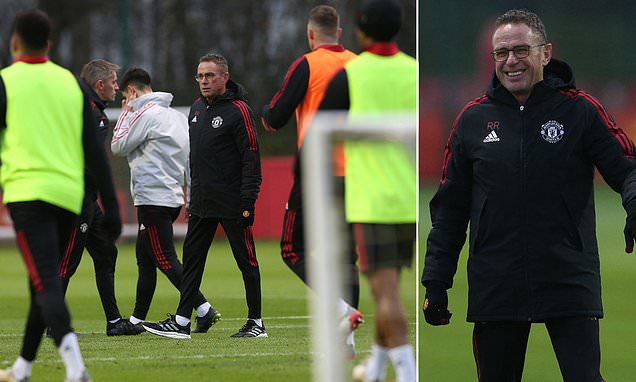 Ralf Rangnick has overseen his first training session at Manchester United as the clubs new interim boss finally got down to work after taking the reins earlier this week.

The 63-year-old was unveiled to the press on Friday and vowed to help turn the tide at United following a turgid start to the campaign, resulting in Ole Gunnar Solskjaer's sacking.

Covid and Visa reasons has delayed Rangnick's arrival and he was forced to watch United's 3-2 victory over Arsenal from the stands, with caretaker manager Michael Carrick overseeing the thrilling win at Old Trafford.

And now United have released images of Rangnick putting his new squad through their paces as he bids to haul them up the league table and into the top four.


The 63-year-old cut a relaxed figure during the training session at United's Carrington Training Complex, casting his eye over the likes of Donny van de Beek and Anthony Martial - who had been frozen out by Solskjaer this season.

Rangnick is famed for modelling the gegenpressing system that has become popular under Jurgen Klopp and Thomas Tuchel, and he is expected to implement a similar style at United.

However, the former RB Leipzig manager said on Friday that he will adapt his style to the players he has at his disposal, insisting that veteran striker Cristiano Ronaldo need not worry about his playing time during his tenure.

‘You always have to adapt your style or idea of football to the players you have available, not vice versa,’ he said. ‘Having seen Cristiano yesterday [Thursday], at his age I’ve never seen a player who is still that physically fit. He’s still a player who can easily make the difference.

‘So it’s about how we can develop the whole team, not only Cristiano. What I saw from Cristiano, he is more than willing to do that, to put his input into the team. His team-mates will have to do the same.

‘It’s not about pressing for pressing’s sake, it’s about control. This is the major target.’

Rangnick also revealed that he spoke with Solskjaer for two hours last week as the former United boss gave his successor the rundown of his new squad.

On Friday, Rangnick vowed to adapt his style to the players he has at his disposal this season

‘I spoke with Ole last Sunday before the Chelsea game,’ said Rangnick. ‘He was very generous to spend one and a half hours on the phone with me telling me his insight and details about the team.

‘I met with Michael two days ago and had a conversation with him for more than an hour. I was trying to convince him to stay on board, but he had obviously taken the decision weeks ago that he needed a break after 30 years in professional football.

‘I’m more than happy to work with the current coaching staff because I need their experience and expertise regarding the squad. I will try to find people who can join us but due to the Brexit regulations it’s not easy.

‘Many of my former colleagues are in long-term contracts with big clubs so are not available right now.’