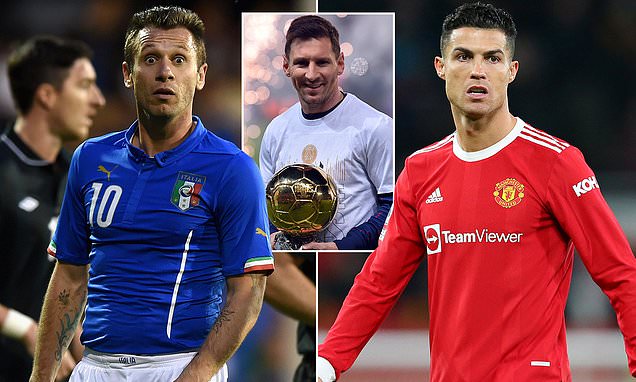 Antonio Cassano has sensationally claimed Cristiano Ronaldo told him to 'respect' his achievements after Cassano was critical of the Manchester United star.

The former Italy forward has been an outspoken critic of Ronaldo, and insisted Paris Saint-Germain star Lionel Messi is a better player than the Portuguese after Messi pipped him to the Ballon d'Or award on Monday.

And as reported by Football Italia, Cassano said Ronaldo allegedly got hold of his phone number from Gianluigi Buffon and complained his comments lacked respect, before Cassano added there were '50 players' he likes more than Ronaldo.

He told Bobo TV: 'The other day I saw a text from a Spanish number. Four long texts. Let's see if he (Ronaldo) confirms it because I also forwarded them to Gigi (Buffon), who told me he had given my number to Cristiano.


'He (Ronaldo) told me I had to respect him, I had to respect the goals he had scored, what he had won and what he represents. I fear nobody and I replied, writing I had just said the truth: there is only one Ronaldo (Brazilian) and Messi is better than him.

'He continued saying that he has money. He scored more many goals in his career, while I had only scored 150. Cristiano has everything in life. He should take it easy and be relaxed rather than see what people say about him. He should be like Messi and be more relaxed.

'This is the truth, I called Buffon and told him too, I told Giorgio Chiellini as well. I've never disrespected him, as a man or as a footballer. I don't like him, there are 50 players I like more than he, so what?'

Cristiano Ronaldo (above) is not in the top five best players of all time, claims Antonio Cassano

Earlier this week, Messi won a record-breaking seventh Ballon d'Or, taking him further beyond Ronaldo's record of five, with the 36-year-old down in sixth place and not attending the event in Paris.

Former Real Madrid, AC and Inter Milan star Cassano has a long history of speaking out against Ronaldo, insisting last month he was not even in the top five players ever - behind Messi, Pele, Diego Maradona, Johan Cruyff and (Brazilian) Ronaldo.

In March, the retired 39-year-old also blasted the Portuguese forward for being too selfish and not caring about his team-mates while he was at Juventus.

'Cristiano only thinks about his goals and records. He's always been a bit selfish, he doesn't give a damn about others scoring goals. He does not live for the game - he lives for the goal and in this moment the situation is getting worse. I think Cristiano has done terribly over the last three years.'