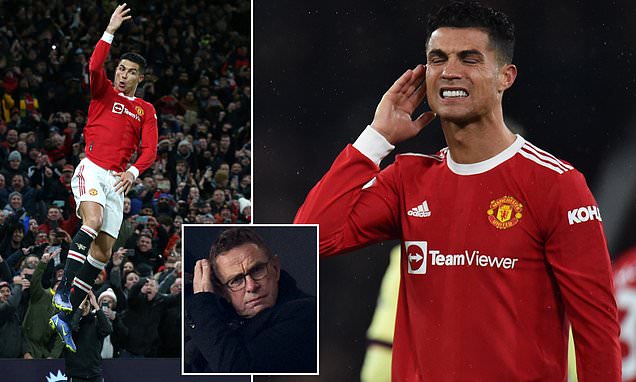 Cristiano Ronaldo is reportedly a major doubt for Manchester United's match against Crystal Palace on Sunday due to a knee injury.

The 36-year-old Portuguese scored twice on Thursday evening - including the winner from the penalty spot - as United beat Arsenal 3-2 at Old Trafford in Michael Carrick's final game in charge as caretaker boss.

But The Sun claim Ronaldo may have injured his knee doing his trademark 'siu' celebration after smashing the penalty high into the net past Aaron Ramsdale with twenty minutes remaining.

The Portugal international demonstrated no immediate ill-effects, running the length of the pitch in 12 seconds to support a late counter attack in the 87th minute.


However, he was substituted for Anthony Martial with two minutes of the 90 remaining, and was seen walking awkwardly off the pitch.

If he is ruled out, it will come as a big blow to interim boss Ralf Rangnick, who is set to take charge of his first game against Patrick Vieira's men on Sunday afternoon.

Rangnick was at Old Trafford on Thursday night to see Cristiano Ronaldo score twice in a 3-2 win over Arsenal, and insisted that it will not be a problem adapting the Portugal star into his fabled gegenpressing approach.

Ronaldo being ruled out would be a big blow to Ralf Rangnick, who is set to take charge of his first game as interim boss on Sunday

'You always have to adapt your style or idea of football to the players you have available, not vice versa,' he said.

'Having seen Cristiano yesterday, at his age I've never seen a player who is still that physically fit. He's still a player who can easily make the difference.

'So it's about how we can develop the whole team, not only Cristiano. What I saw from Cristiano, he is more than willing to do that, to put his input into the team. His team-mates will have to do the same.

'It's not about pressing for pressing's sake, it's about control. This is the major target.'

The German boss, 63, also saw Ronaldo reach another milestone while he was sat in the stands, with his first goal to put United 2-1 in front the 800th goal of his professional career.

It was the first time ever a male or female professional footballer in history had scored 800 competitive goals, and his penalty soon after took his tally to 801.

And less than 24 hours after breaking the 800-goal barrier, the Portuguese posted a video on Twitter paying tribute to his record, with a number of still images scattered in the background among replays of his many goals and celebrations during his career.

In his tweet, he added: 'Very happy to become the first football player to score more than 800 official goals.

'What an amazing and unforgettable run this is becoming… Thank you to all my supporters for always standing by my side. 801 and still counting!'

Very happy to become the first football player to score more than 800 official goals. What an amazing and unforgettable run this is becoming… Thank you to all my supporters for always standing by my side. 801 and still counting!🙏🏽👊🏽 pic.twitter.com/1UqngjqE8V