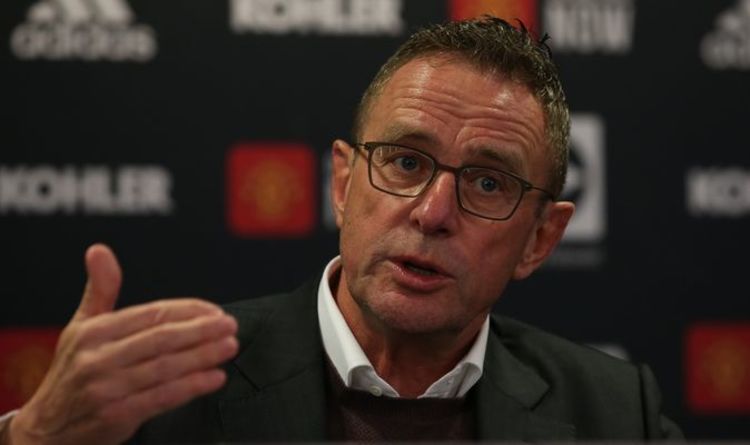 Ralf Rangnick is already looking to solve Manchester United’s ‘biggest issue’ with La Liga side Sevilla reportedly preparing for a January transfer raid. Rangnick took over as Red Devils boss on Friday after seeing caretaker Michael Carrick lead them to a 3-2 win over Arsenal.

That has left United sitting seventh in the Premier League, with qualification for the Champions League now the top target.

One of the Red Devils’ biggest problems this season has been their defence, with United owning the worst defensive record in the top seven.

They have conceded 24 goals in 14 games, an average of more than 1.7 per 90 minutes, and it is an issue that Rangnick has quickly identified.

“The major target for me is just to bring more balance to the team,” Rangnick said in his first press conference as United boss.

“We conceded two goals yesterday and if you look at the total of number of goals conceded, it is an average of two a game.

JUST IN: Varane compares Solskjaer to Zidane as he opens up on Man Utd axing

“That is just too much - those are not the kind of games you need every day. In football to me, it's to minimise the coincidence factor.”

Rangnick has developed a reputation for being a transfer guru at his previous clubs and already looks to have identified a solution to United’s biggest problem.

That solution reportedly comes in the form of Sevilla defender Jules Kounde, who was the subject of a transfer chase by Chelsea in the summer.

According to Super Deporte, Sevilla sporting director Monchi is ‘preparing changes’ as he makes plans for the January window.