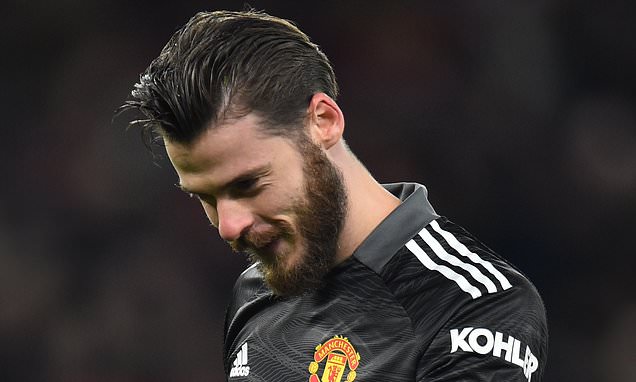 David de Gea's role in Arsenal's farcical opener at Old Trafford showed a lack of 'bravery', Trevor Sinclair believes, as the ex-England star claimed the Spaniard's time at Man United may come to an end soon.

De Gea, 31, has enjoyed a strong season thus far for United, standing out as a top performer alongside Cristiano Ronaldo despite the club's poor start to the campaign.

However, the Spaniard was left red-faced on Thursday night after Emile Smith-Rowe struck home while the goalkeeper was lying down on the turf, seemingly injured.

De Gea attempted to punch clear an Arsenal corner and collided with team-mate Fred. The Brazilian made contact with his goalkeeper's ankle, causing the 31-year-old to fall to the turf.


As the ball fell to Smith-Rowe on the edge of the area, De Gea stayed down, allowing the Englishman an open net to strike into.

Referee Martin Atkinson blew his whistle once the ball crossed the line, awarding a free kick in United's favour, but VAR intervened to deem that De Gea had not been fouled in the build up as he collided with his own team-mate.

The bizarre goal has stirred debate among fans and pundits as to whether De Gea ought to have gotten back to his feet until the ball was out of play, and talkSPORT pundit Sinclair says the incident was indicative of De Gea's lack of 'bravery'.

'They got it right,' Sinclair said to talkSPORT regarding the referee's decision. 'We've all been smashed in the ankle, it's not going to get any worse.

'You can get back to your feet, wait for the ball to go out of play, then get the assistance you need medically.

Sinclair has forecast a grim few months for the United keeper, predicting that new interim boss Rangnick will not favour the established No 1 as he prefers 'sweeper keepers'.

'Sometimes when you go on the pitch, you've got to take a bit of pain – and that wasn't good enough,' he added. 'And he's cost his team a goal because the shot from Smith Rowe wasn't great.

'With Ralf [Rangnick] coming in, wanting to play a high line, I think he's going to have to be sweeper keeper.

'So De Gea's time at Man United is probably going to end quite shortly.'

He added: 'For me, that's a little acid test, how big's your heart? And he's let them down.'