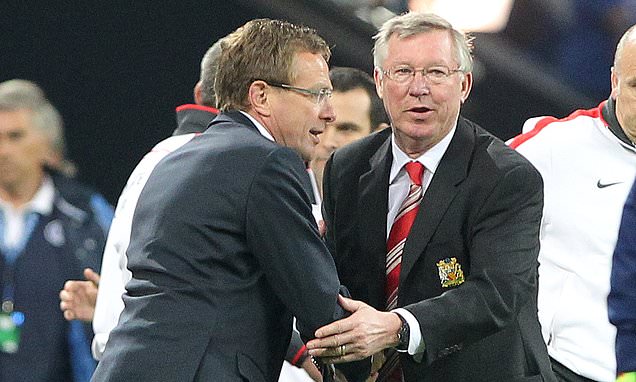 New Manchester United boss Ralf Rangnick reflected on fond memories of sharing a bottle of wine with Sir Alex Ferguson in 2011, when the pair first met.

Ferguson, United's greatest ever manager, came across Rangnick's Schalke in the semi-finals of the Champions League in 2010-11.

After a 2-0 win away in Germany, United finished the job at home with a 4-1 win to set up a final with Barcelona - and afterwards Rangnick was invited to Ferguson's office for a drink.

Now in charge of Manchester United, Rangnick is excited to sit down with Ferguson again

'We spoke after the second leg here at Old Trafford,' Rangnick told MUTV in his first sit-down interview.


'He invited me to his office and he enjoyed the glass of wine more than I did because we had no chance in that game!

'That was the first time I met Sir Alex and we met again in 2015 at an event by Kicker sports magazine for some awards.

'We had dinner together and I am very much looking forward to meeting him again in the next couple of weeks.'

Ferguson was full of praise for Rangnick back in 2011 and felt the German's side were in 'complete control' despite losing.

The pair will sit down in the coming weeks and no doubt reminisce about their battle in Europe a decade ago, which ended with United being beaten in the final by Pep Guardiola's Barcelona.

Ferguson's verdict of 'control' came back round as it was the word Rangnick used repeatedly in the interview when asked what his primary objectives were to restore United back into the top four this season.

Rangnick, 63, added: 'In football it is all about control. If you want to win games you have to have control no matter if the other team has the ball or you have the ball.

'This is probably one of the major targets in the next couple of weeks. To help the team to have control. Against top sides recently, I saw the games against Liverpool and Man City, at Chelsea, although we got a point there, and even against teams like Watford, they didn't have control of the game and this is what we will try to achieve.

Rangnick spoke of his excitement at having such an exciting squad at his disposal to work with, name-checking youngsters such as Mason Greenwood and Marcus Rashford.

Jadon Sancho is a player Rangnick knows well from his time in the Bundesliga in Germany and United's interim coach explained that he attempted to secure the former Man City youngster's signature before he joined Borussia Dortmund.

The pair met in London but Sancho was unable to be convinced to snub an offer from Dortmund.

'Jadon Sancho I know from the Bundesliga and as a matter of fact I met him when he was 17 in London,' Rangnick explained.

'We were trying to convince him to come to Leipzig and a couple of months later he decided to go to Dortmund which was not a wrong step from his perspective.'

Rangnick has limited time available to him to get his ideas across before he takes charge of his first game against Crystal Palace on Sunday.

There is then a midweek round of Champions League matches to round out the group stage before United take on Norwich City.

After watching the 3-2 win over Arsenal from the stands, Rangnick addressed the media for the first time as United boss on Friday morning before having photos with the shirt inside Old Trafford.

He will take training on Friday afternoon and has said it is his immediate objective to 'get to know' his players and staff.