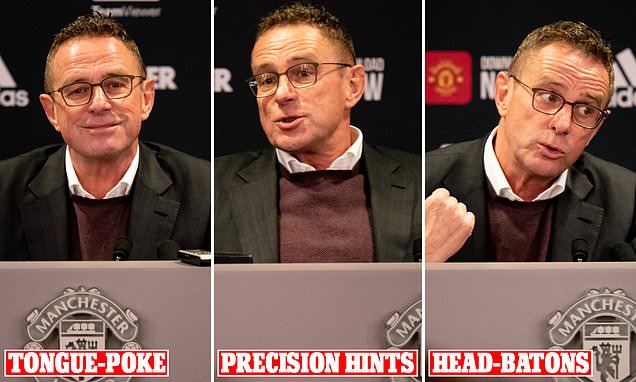 Manchester United's new interim head coach Ralf Rangnick sat down in front of the press for the first time since taking on the role on Friday morning.

The German was expressive, not only in his words, but with his body language, too as he addressed the media ahead of United's clash with Crystal Palace.

Here, expert JUDI JAMES breaks down what we can learn about the 63-year-old from his first outing in the Old Trafford hotseat.

While Ole Gunnar Solskjaer’s press conference body language was all about hunched posture and some playful, childlike-looking grins, Rangnick’s scouring ‘lighthouse’ eye-gaze, that involves an alert and commanding eye expression, suggests something more on the status level of a friendly-but-firm supply teacher taking over a new and unruly class.


His body language surface performance looks like a deliberate sham.

Answering press questions he becomes master of the casual shrug, shrugging his shoulders and eyebrows as well as performing a mouth shrug not only to remind us of his lack of responsibility for the team’s previous form but also to suggest a rather laid-back and spontaneous approach to his own targets for them going forward.

This casual look appears incongruent and unreliable though and there are at least four body language cues that suggest he could be much tougher and more disciplined that he is pretending to look:

• His tongue-poke -  This is a rejection gesture he uses more than once as he is otherwise politely listening to a question from the press, suggesting he might not like to have his authority questioned.

• His eye-expression - This looks sociable and friendly but it changes quickly to something deeper, less warm and maybe more calculating as the press questions are read out. One change came when one of his own quotes was being read back to him, hinting he might not like to be criticised.

• His head-batons - This method of adding emphasis to your words suggests a firm and commanding ‘I’m right’ approach.

• His precision gesture - He might like to shrug away as he’s questioned on his plans but at one point a hand rose in a strong precision pinch, suggesting that his plans might secretly be meticulous.

A strong hint about his focus came when he spoke about the team. He mentioned the younger players first but it was when he mentioned the ‘Experienced players in the squad’ that he performed a head-cock and used strong eye contact, suggesting these players will be his priority.

He was still performing a dismissive shrug when he hinted about his target of ‘more balance’ but his underlying signals suggest this is not something scribbled on the back of a fag packet.

When he referred to helping ‘outstanding players to keep away from their own goal’ he performed a very strong and significant pushing/sweeping gesture with one hand, suggesting his plans could well be based on keeping star strikers like Ronaldo up front doing what they do best.