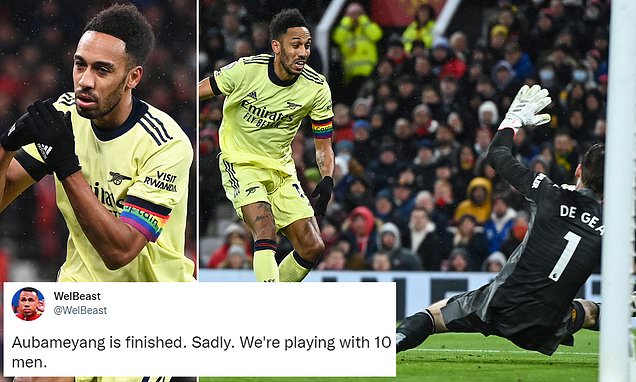 Arsenal fans have claimed that Pierre-Emerick Aubameyang is finished after the Gunners captain endured a dismal game in their loss at Manchester United on Thursday.

The Gabon forward failed to find the net at Old Trafford to extend his goalless run to five Premier League matches, with Aubameyang missing a late chance to equalise but fired straight at David de Gea.

Aubameyang's poor night was summed up by the statistic that he touched the ball just 28 times in his 75 minutes on the pitch, the lowest out of any outfield player on Thursday night. Only United goalkeeper David de Gea made fewer touches with 26.

The 32-year-old was hauled off with 15 minutes remaining even though the Gunners desperately needed a goal, with Arsenal fans claiming that the striker is now well past his best.


One fan tweeted: 'Aubameyang is done out here.. definitely the weakest link get him off!'

Another claimed: 'Aubameyang is finished. Sadly. We're playing with 10 men'

Meanwhile, on Arsenal fan posted: 'Don't start Aubameyang till Sunderland Carabao Cup game. Been awful for a good while now.'

Another said: 'Arsenal should just sell off Aubameyang, if they cant get a buyer give him out for free, man is finished tbh.'

And one fan claimed: 'Aubameyang should be benched. We look far from scoring with him on the pitch.'

Aubameyang has endured a difficult time on the pitch recently, with the Gabon striker failing to find the net in five league games in a run that has also seen him miss two penalties.

Meanwhile, former Arsenal captain Thierry Henry could not comprehend why Mikel Arteta took off the striker when they were looking for a goal.

Henry told Amazon Prime Sport on Thursday night: 'One thing I couldn't understand is: Aubameyang is your captain, he is your goalscorer, you put him as a captain. Fifteen minutes to go, you are losing 3-2, and you take him off.

'3-2, away from home, and you take your captain, your symbol, off the field, and you know he can score you goals. So something is not right there.'