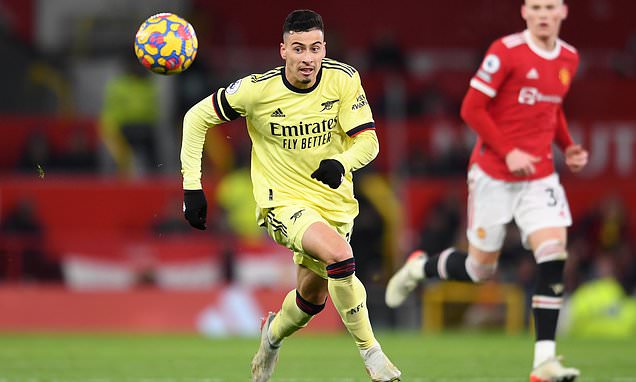 Martinelli was a constant threat for the Gunners throughout his 90 minutes on the Old Trafford pitch, with the 20-year-old setting up Martin Odegaard for the Gunners' equaliser for 2-2.

The promising display follows an excellent goalscoring cameo appearance against Newcastle last week, with Arteta praising how threatening the Brazilian was on Thursday night.

'He looked a threat,' Arteta said of Martinelli in his post-match press conference. 'He had a big chance in the first half, and he probably should have played on.


'He created assists, he worked extremely hard, and he had some really good moments – he looked a threat.'

The Brazilian has struggled for Premier League minutes at Arsenal this season, with Martinelli only playing 37 minutes of top-flight football since the middle of August before Thursday night.

But Martinelli impressed in what was only his third league start of the season and even lasted longer on the pitch than club captain Pierre-Emerick Aubameyang, who was hauled off for Alex Lacazette with 15 minutes to play.

The Gabon forward is now without a goal in five Premier League matches and former Arsenal captain Thierry Henry could not comprehend why Mikel Arteta took off the striker when they were looking for a goal.

Henry told Amazon Prime Sport on Thursday night: 'One thing I couldn't understand is: Aubameyang is your captain, he is your goalscorer, you put him as a captain. Fifteen minutes to go, you are losing 3-2, and you take him off.

'3-2, away from home, and you take your captain, your symbol, off the field, and you know he can score you goals. So something is not right there.'