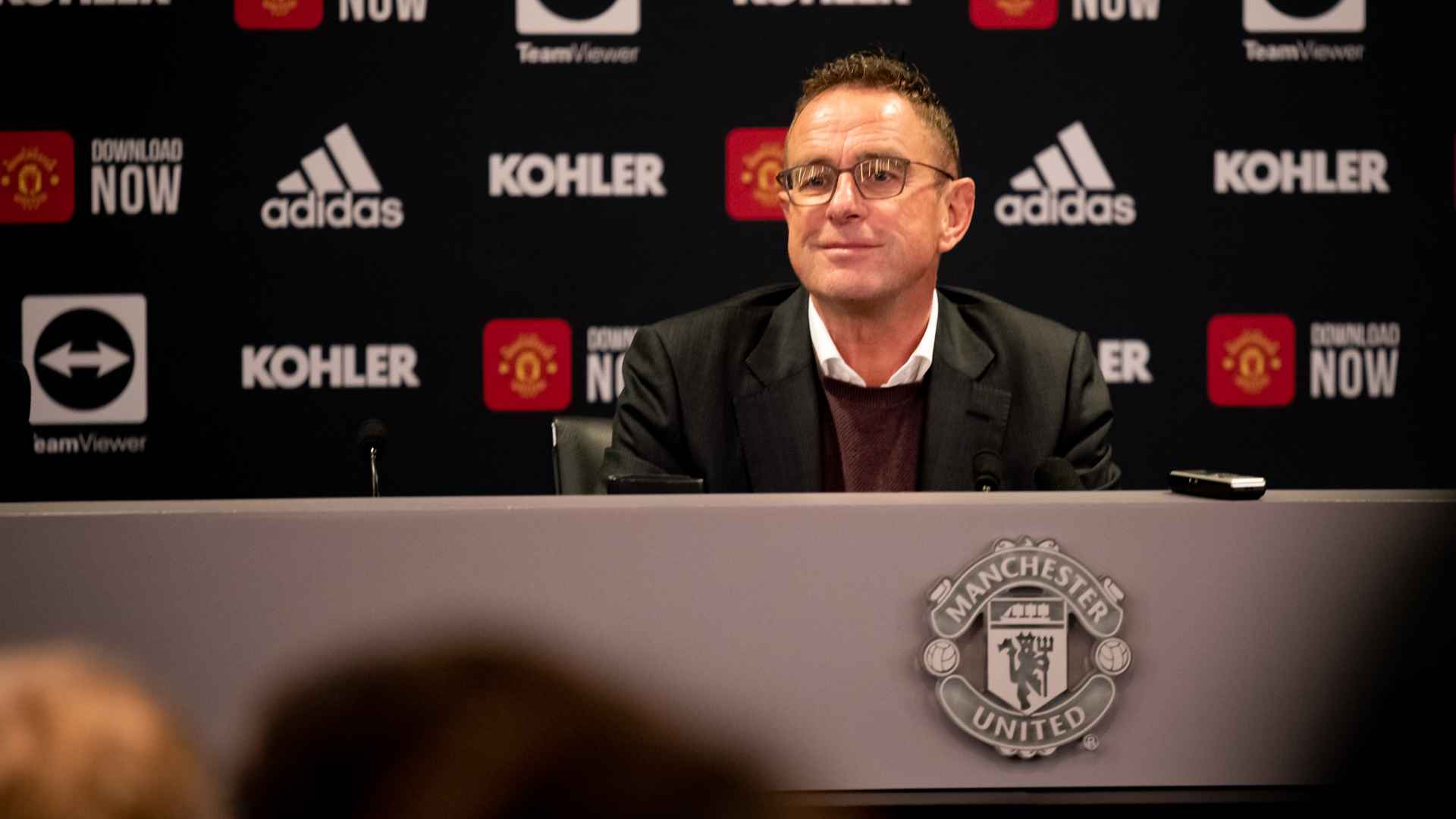 For opposition managers facing Ralf Rangnick's Manchester United, it may soon be about beating the press but the task for the new interim manager early on Friday morning was meeting the press.

After a quick turnaround from staging the Reds' exciting 3-2 victory over Arsenal, Old Trafford hosted the innovative coach's introductory briefing with the media in the plush conference room that, due to the pandemic, has been under-used since refurbishment. The place was abuzz with expectation as we waited to listen to somebody renowned as being a great student of the game.

Of course, restrictions are still in place, with the journalists unable to sit next to each other, but a decent turn-out was still permitted to quiz the new man on what lies ahead for the rest of the season under his interim stewardship, before he takes up a two-year consultancy role at the club.

And he certainly did not disappoint.

Before being asked a question, Ralf's first words were a 'hello' to everybody and a thank you for getting up early to attend, which was always going to start life off well with the tired journalists. His warmth was apparent from the outset and there was an engagement that is going to endear him to the media and fans alike.

From just a few sentences, it is obvious he is somebody who cares passionately about football and is willing to share his views on any topic relating to it. You sense he would have been happy to chat all day but for the need to get to Carrington to start working with the players and taking a three o'clock training session.

It will be fascinating to hear his assessment of matches straight after the final whistle and he spoke eloquently about Arsenal's controversial opening goal and the team's reaction to it.

As the German pointed out, he studied at university to learn English and there will never be any language barrier for a coach with much charm and humour, who seems keen to get his ideas across.

There was a question about a report in his homeland that he would be paid a bonus if he can lure Borussia Dortmund's Erling Haaland to Old Trafford and in reply, he looked through an imaginary contract and joked about the clause of £10million per player he'd earn for signing other stellar names ("Kylian Mbappe, Robert Lewandowski"). Then he dismissed it completely as "nonsense, of course". He may have to field quite a few rumours like that one during his time here.

Nonetheless, Rangnick showed a willingness to discuss football sensibly and appropriately with those at the conference, something which is always going to stand him in good stead. If the first impressions were mutually positive - he responded to a 'good luck' suggestion at the end with a 'thumbs up' and a 'thank you' - then the supporters will also like what he had to say about their contribution to what lies ahead.

He knows United are "one of the biggest, if not the biggest" clubs in the world and it was a role he could not turn down.

There were a few mentions of the Reds' DNA, something that is viewed as being vital to the running of the club. Despite his lack of previous links with United, aside from meeting us as Schalke manager in the 2011 Champions League semi-finals, and Googling to find a full list of players from the past 50 or 60 years to make four top dream teams of stars, there is much respect and nods to the past.

"It's unique and everyone who works for this club has to follow this legacy and make sure the DNA is always respected," he commented.

As he suggested, he is fully aware of the Munich Air Disaster as it happened a few months before he was born in 1958. Best and Charlton were referenced in terms of the glorious 1960s side but it's also the fans who help to make this great club the institution it is.

There was another sense of that against Arsenal, something Rangnick witnessed from the directors' box and relayed almost in awe of the atmosphere and togetherness of a crowd that always backs the team, regardless of all the outside noise.

A man who fell in love with the English game by visiting matches in the south in the late 1970s and early 1980s, during his academic days, longs for that same connection. The raw emotion of losing yourself inside a full stadium and being passionate about what is unfolding on the pitch.

This is what Old Trafford gives you and it was clear from the glint in his eyes that the new man enjoyed the rollercoaster win, even if he would have liked greater control and not to give up a couple of goals. There will be an excitement on his part to deliver for these fabulous fans and, despite his natural warning that things would have to go step by step, game by game, and take time with precious few hours on the training ground possible in such a busy period, it was he who brought up the Champions League in relation to things to look forward to in 2022.

The expectations are high, the pressure will be on - as it always is at Manchester United.

But my first impression from inside the press conference room is that we are all going to like Ralf Rangnick very quickly and hopefully fall in love with his passion and his football.

There is an excitement that cannot be denied about seeing what influence he can have on the team and, if he is as engaging and clear in communicating with the players later today, it is hard to see how they will not be fully on board with his plans for what lies in store.

The opinions in this article are those of the author and do not necessarily represent the views of Manchester United Football Club.