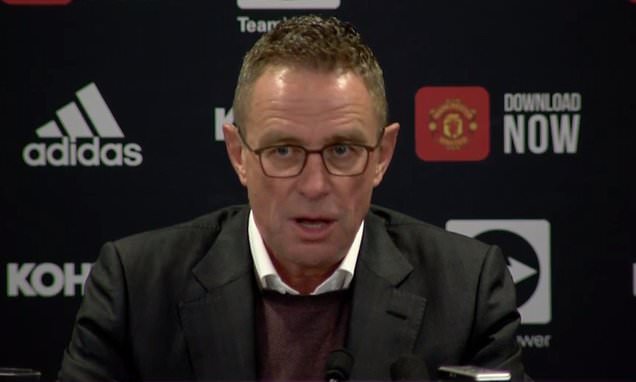 Ralf Rangnick has revealed he rejected Chelsea after they approached him to become their interim manager because of the short-term nature of the deal.

Rangnick, 63, has penned a six-month contract to take over at Manchester United until the end of the season, and will then move into at two-year advisory role which will see him help decide who his own successor will be.

But his appointment at United came as somewhat of a surprise in light of his stance over not being a short-term option, which saw him rebuff Chelsea's offer of a four-month contract after they sacked Frank Lampard.

'At the time, when Chelsea contacted me, they only spoke about the option to become interim manager for four months, without any prospective for the long-term,' he said, speaking at his first press conference in charge of United.

'In the end, to be honest, if a club like Manchester United contacts you for such a role, you cannot possibly turn it down.'

Chelsea approached Rangnick to take over at Stamford Bridge after axing club legend Lampard in January, but the veteran coach later admitted he feared he would have been accused of being a 'lame duck' from 'day one'.

Despite this, United were successful in their approach - with the consultancy job in their hierarchy understood to have been a major factor.

He faced the media for the first time this morning, having watched his new side beat Arsenal in a five-goal thriller last night to keep their top four ambitions alive.

In the wide-ranging half an hour chat, Rangnick revealed how he would bring continuity to the club, and also refused to rule out becoming their permanent boss.

After thanking journalists for arriving so early, he promptly turned his attention to United's scattered transfer policy and their failure to stick to their DNA.

'The club has had no continuity in signing new players and sticking to the DNA of the club,' he said. 'In the future, the board members and my self have the same opinion. It's important not to have many changes in management.'

When questioned about his ambitions for his time at the club, he added: 'In the ideal world, we will be in the top four regularly but also playing for titles.

'We are still in the Champions League and can hopefully get further in that competition. The DNA of the club is clear.

'I have, of course, watched all the most recent games, even before contact from the club. I'm pretty well aware of what's happening here, and in the Premier League. It's clear the team have abundantly talented players.

'The major target for me is to bring more balance into the team. Even yesterday we conceded two goals and needed three to win the game. We're conceding too much. It's my approach to help the team, to get more balance.

'[The squad] is definitely good enough to compete in the top [four]. The top three are very stable, and have great coaches.

'This is something we have to develop. When Jurgen came to Liverpool, the squad he inherited was not a better one than what I have now at Manchester United.'

He has also noted that he may remain in the dugout for longer than the current six month period, saying: 'They have been very clear about a six-and-a-half month role... I may recommend they continue working with me for one more year.'

Rangnick was forced to wait several days to officially take charge at United, but his work permit and paperwork were eventually approved yesterday morning.

Today, he is set to meet his squad for the first time for a training session - as United begin their preparations for this weekend's clash against Crystal Palace.