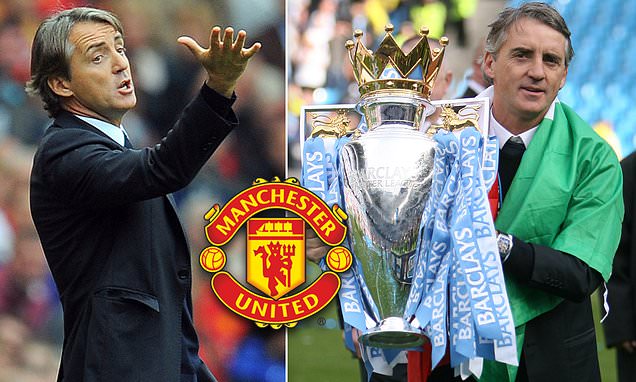 Roberto Mancini is a shock candidate to become Manchester United's permanent manager next summer, according to reports.

Mancini, who memorably led fierce rivals Manchester City to the Premier League title at the expense of United in the 2011-12 season, is said to be one of several bosses under consideration for the role.

Despite currently being in charge of the Italian national team, Mancini has admirers at Old Trafford and a surprise move has not yet been ruled out, The Telegraph claim.

Roberto Mancini has emerged as a contender to take over at Manchester United, reports say

His position at the helm of the Euro 2020 champions will influence whether he is able to take over at United, though, with Italy consigned to the World Cup play-offs next March as they look to secure a spot in Qatar.


However, depending on how this situation develops, United may find themselves able to swoop for Mancini in their hunt to name Ole Gunnar Solskjaer's successor.

The same outlet have also reported that the interest from United may still convince the 57-year-old to join them, even if Italy were to reach next winter's tournament.

Mancini has been described as remaining 'firmly committed' to his role at the helm of his homeland, and his lucrative contract with them runs until 2026.

But a return to Premier League football after eight years away may turn his head, despite his storied history with United's cross-city neighbours.

Indeed, the Red Devils' hierarchy have left Mancini in the running for the vacancy, although a backlash from supporters would be expected in the event of his hiring.

Until the end of the season, United have opted to appoint Ralf Rangnick as their interim manager - and he will remain at the club for a further two years in a consultancy position, meaning he will also advise over his replacement.

For now, there is a delay over Rangnick being able to officially take charge as he continues to wade through problems relating to his work permit.

As a result of the hold-up, Michael Carrick will oversee United's clash against Arsenal later this week, while United work on Rangnick's deal behind the scenes.

It was revealed the 63-year-old does not meet the main requirements for a manager seeking a Governing Body Endorsement, and his case will now be assessed by an independent 'Exceptions Panel' in order to gain his permit from the Home Office.

The rules for a manager coming from the European Union stipulate that the candidate must have 'managed a club in a Top League for the Prescribed Time' - which, in this case, is for two consecutive years, or for three of the previous five.

Staff at United's Carrington training base were told yesterday that Rangnick was unlikely to take over until the end of the week.

United will also have one eye on their next major, long-term appointment to fill their vacancy in the dugout.

Pochettino, as reported by Sportsmail earlier this month, was open to taking up the job mid-season because he is not satisfied with life in Paris or at his current club.

However, there was no official approach made from United.

Ten Hag is the alternative target for United if Pochettino, their No 1 choice, does not become their new coach next summer.

He is interested in the role, it is understood, and Ajax would not stand in his way if he decides to leave at the end of the season.