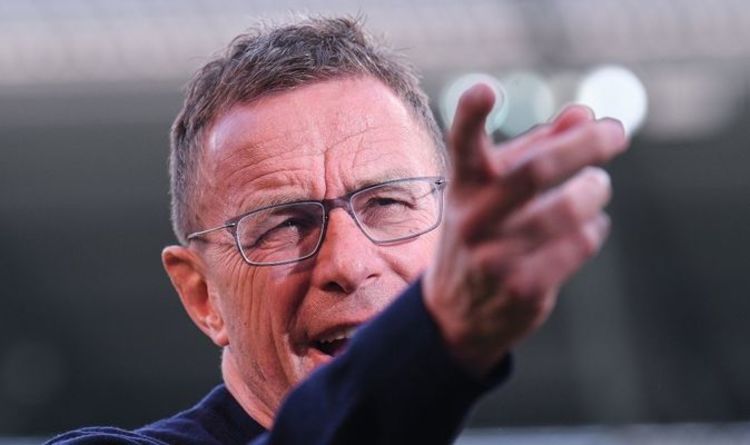 Manchester United interim boss Ralf Rangnick is expected to have a say on the club's transfer business and policy moving forward after agreeing to a two-and-a-half-year deal with the board that also includes two seasons upstairs in a consultancy role. The German managerial veteran is an innovator, renowned for driving his previous clubs forward with his ideas and creative thinking - whether that's tactics on the field or recruitment off of it.

For that reason, his arrival during a time of crisis at Old Trafford makes perfect sense, particularly given that none of the club's top managerial targets are currently available.

Rangnick has already previously scrutinised a small number of current United players during his time speaking the media since his last job, including Luke Shaw.

It would suggest he may not be scared to shake things up and stamp his own mark on the side he has inherited from Ole Gunnar Solskjaer.

There has already been talk that he could look to raid his former club RB Leipzig to sign a midfielder willing to implement his press, so with that in mind Express Sport takes a look at four former players Rangnick could recruit for his new adventure with United...\

Ralf Rangnick could turn to some of his old players now he's at Man Utd (Image: GETTY)

The all-action midfielder is reportedly being lined up by Rangnick ahead of the January window, meaning he is potentially a serious target.

Haidara had a tough start to life in Germany following his move from sister club RB Salzburg but now he is a regular in Jesse Marsch's midfield.

The explosive, box-to-box Malian would represent a new attractive option for Rangnick in the middle of the park.

Fred and Scott McTominay are still yet to fully win over the United faithful and there is some suggestion the signing of a new central midfielder is one of the club's top priorities.

The versatile right-back could provide some healthy competition for Aaron Wan-Bissaka, who has virtually gone unchallenged this season.

Diogo Dalot looks unlikely to force his way into the starting XI but the jury is still out on Wan-Bissaka.

While the defensive side of his game is generally strong, his attacking skillset going forward has been identified as a major flaw.

Mukiele likes to venture forward, while he is also comfortable at centre-back and as part of a back-three.

He could prove a worthwhile addition that keeps Wan-Bissaka on his toes.

A total wildcard option but Rangnick already knows how to get the best from Werner.

Ne notched over a goal every two games during his time under Rangnick at Leipzig in 2018/19 just one season prior to the best campaign of his career in 2019/20.

Werner looks unlikely to make the grade at Chelsea, who appear to be open to a sale at the right price.

Although United have enough forwards and realistically, are unlikely to pursue the deal, the capture of Werner could prove to be a masterstroke with Rangnick at the helm.

The German is the perfect coach to restore Werner's confidence, although he remains unlikely to leave Chelsea until the end of the season.

Another versatile defender, Klostermann is one of Rangnick's loyal disciples from his first spell at RB Leipzig.

Klostermann was part of the United interim boss' team way back in 2015/16 - the season Leicester won the Premier League.

The 25-year-old is comfortable at both right-back and centre-back, meaning he could help bolster the competition for places at the club.

While he only inked a new contract last year, there is every chance Klostermann could be available for under £25m, which is the current price being quoted for Kieran Trippier by Atletico Madrid.