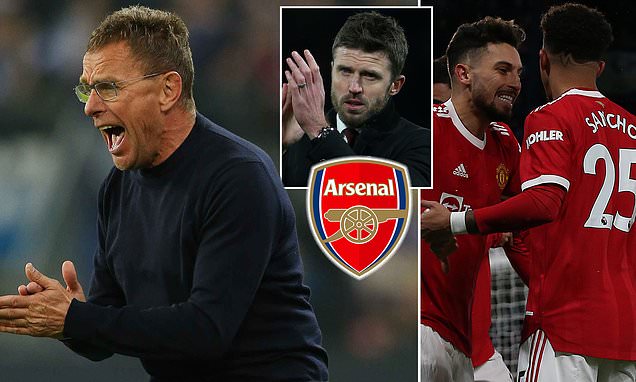 Manchester United interim manager Ralf Rangnick will reportedly not be in charge of Thursday's clash with Arsenal as the club continues to overcome issues relating to the German's visa and Covid-19 regulations.

Rangnick’s appointment until the end of the season was confirmed on Monday but immediately there were concerns that he would be prevented from starting the job by work-permit red tape and new Covid restrictions.

Club staff were told at Carrington on Monday that Rangnick is unlikely to be in charge until the end of the week, while the 63-year-old German waits for his permit to be approved.


Anybody arriving into the UK from a foreign country must now take a PCR test and self-isolate while waiting for a negative result due to new restrictions bought in to try and tackle the Omicron variant of Covid.

As a result, according to the BBC, the German will not be in the dugout for Thursday night's visit of Mikel Arteta's Arsenal.

United remain hopeful Rangnick, who has replaced the sacked Ole Gunnar Solskjaer on a short-term contract until the end of the season, will be given the green light to take over in time for Palace’s visit on Sunday.

A club spokesman said on Monday night: ‘We are working calmly and carefully to secure a visa for Ralf in line with all relevant regulations and protocols. These are processes which have to be followed and we are doing so as swiftly as possible.’

The Old Trafford showdown with the Gunners is already pivotal in the race for Champions League football with Arsenal level on points with fourth-place West Ham.

United are five points behind the Gunners and need to turn their season around quickly to have any chance of finishing in the top four.

After his arrival was confirmed on Monday, United announced that Carrick and the rest of Solskjaer’s backroom team — assistant Mike Phelan, coach Kieran McKenna and goalkeeper coach Richard Hartis — will be staying at the club.

Rangnick will be allowed to bring in a small number of coaching staff, although his trusted video analyst Lars Kornetka is staying at Lokomotiv Moscow to replace him as director of sports and development.

United expressed their gratitude for the Russian club’s co-operation after it emerged that they did not have to pay compensation to release Rangnick from the remaining two-and-a-half years of his contract.