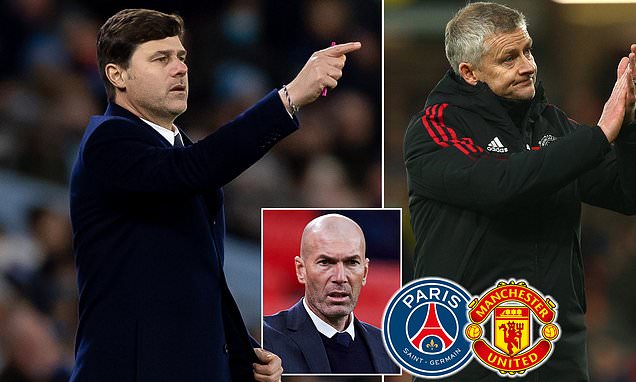 Paris Saint-Germain were reportedly willing to allow Mauricio Pochettino become the new Manchester United manager – but only if two conditions were met.

While Pochettino was linked with the job, United instead confirmed Ralf Rangnick as their new interim manager on Monday, with the German taking over until the end of the season following the departure of Ole Gunnar Solskjaer.

United chief John Murtough insisted that Rangnick was always the club's 'number one candidate' to take on the role but it is understood that Pochettino is one of the favourites being considered for the position on a permanent basis next summer.

And United could have had their man this month if two terms were met, according to French news outlet Telefoot.


Telefoot claims that PSG would have let Pochettino leave if United stumped up £17million to buy him out of his current contract – which runs until June 2023.

Once the financial condition had been agreed, Telefoot went on to claim that PSG would have only sanctioned the move as long as Zinedine Zidane was ready to step in and take over from the Argentine as boss.

PSG had reportedly lined up the former Real Madrid boss as Pochettino's replacement but never actually ended up approaching the Frenchman about the job.

It came after United never formally approached Pochettino about the vacant position at Old Trafford, leaving Rangnick to take the job on a six-month basis until the end of May, where he will then stay on in a consultancy role for a further two years.

While a move for Pochettino never came to fruition this month, it is likely that United will hold talks with the former Spurs boss at the end of the season when their search for a permanent manager begins.

Pochettino refused to distance himself from the job after his PSG side were beaten by Manchester City in the Champions League last week, claiming he was only focused on the task at hand.

'We are always focused on the football – our games and our work,' said Pochettino ahead of PSG's Ligue 1 clash with AS Saint-Etienne, via CBS.

'It is not us, nor the club, who generate these situations. It does not affect us.

'I am focused on PSG. We are used to rumours arriving. When they do arrive, it is a good sign that there are many of them – it is a sign that we are doing good work.

'We are calm and humble. It is not us creating these rumours.'

United announced Rangnick on a short-term deal earlier this week but are experiencing difficulties in getting him started due to work-permit red tape and new Covid restrictions.

The German won’t be in the dugout for Thursday’s home clash with Arsenal, and are scrambling to have him in place against Crystal Palace three days later.

Club staff were told at Carrington on Monday that Rangnick is unlikely to be in charge until the end of the week, while the 63-year-old waits for his permit to be approved.

United remain hopeful Rangnick will take over in time for Palace’s visit on Sunday and a club spokesman said on Monday night: ‘We are working calmly and carefully to secure a visa for Ralf in line with all relevant regulations and protocols. These are processes which have to be followed and we are doing so as swiftly as possible.’

However, the situation is hardly ideal for a coach who only has half a season to make an impact as it is, and raises more questions over United’s decision to wait until after the two-week international break to sack Solskjaer.

Carrick denied that Rangnick had any input on his team selection or tactics at Stamford Bridge on Sunday — United insist technical director Darren Fletcher was speaking to video analysts, not the new manager, by phone from the dugout — and that is expected to be the case again if Rangnick is unavailable for Arsenal.

United confirmed on Monday that Carrick and the rest of Solskjaer’s backroom team —assistant Mike Phelan, coach Kieran McKenna and goalkeeper coach Richard Hartis — will be staying at the club.

Rangnick will be allowed to bring in a small number of coaching staff, although his trusted video analyst Lars Kornetka is staying at Lokomotiv Moscow to replace him as director of sports and development.

United expressed their gratitude for the Russian club’s co-operation after it emerged that they did not have to pay compensation to release Rangnick from the remaining two-and-a-half years of his contract.

‘I am excited to be joining Manchester United and focused on making this a successful season for the club,’ said Rangnick.

‘The squad is full of talent and has a great balance of youth and experience. All my efforts for the next six months will be on helping these players fulfil their potential, both individually and, most importantly, as a team. Beyond that I look forward to supporting the club’s longer-term goals on a consultancy basis.’

While Rangnick’s involvement against Arsenal and Crystal Palace remains in some doubt, United’s next game after that — at home to Young Boys in the Champions League on Wednesday — could be moved to a neutral venue abroad due to concerns over the new Omicron Covid variant.

United are seeking guidance from UEFA to see if the Swiss club’s players will be granted an exemption from quarantining if they travel to the UK.

Meanwhile, fans will pay tribute to Solskjaer at the Arsenal game by displaying the ‘Ole Legend’ banner in tribute to the former United favourite, who was manager for nearly three years until last week.