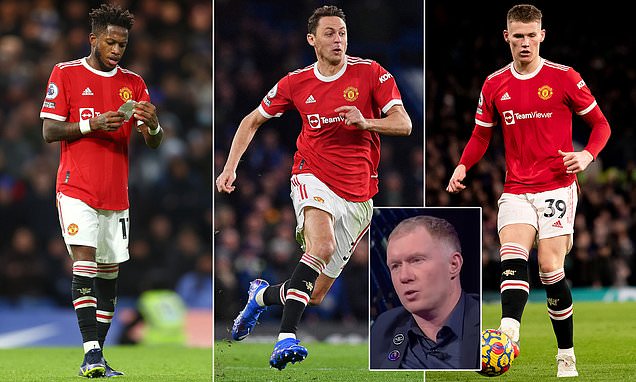 Paul Scholes has once again laid the boot into Manchester United by suggesting the current midfielders at the club are not at the sufficient quality level to 'make the team play football.'

Scholes was watching on as United took a point from Chelsea on Sunday and left Stamford Bridge having halted their run of domestic losses - but the Red Devils legend remained far from impressed by what he saw.

Joining Michael Owen and Glen Hoddle on Premier League review to discuss the showdown in west London, Scholes quickly made his opinions known on where United are going wrong in the centre of the park.

After former Liverpool man Owen had spoken about the need for United to get all their best players on the pitch and utilise the midfield, Scholes pulled no punches with his response.

Fred was part of the midfield three Scholes spoke about, and required instructions mid-match

Interim boss Michael Carrick had opted for three across midfield; Nemanja Matic at a defensive base, with Fred and Scott McTominay either side.

Just ahead, Bruno Fernandes was deployed in an attacking role with pacey stars Marcus Rashford and Jadon Sancho just further ahead.

For Scholes, though, United do not have enough star quality across the squad to go toe-to-toe with rivals in the biggest of games, despite bringing in some huge names over the summer.

Scholes added: 'When it comes down to the proper games I just don't think they're quite good enough.

'When they try to do that - they tried to do it against Liverpool and got absolutely obliterated.'

When asked by Owen what must be done to get back to the 'Manchester United of old,' a resigned Scholes offered a shrug and replied: 'They need a coach, and better players.'

United return to action on Thursday night when they host rivals Arsenal at Old Trafford, before then welcoming Crystal Palace to the north west three days later.