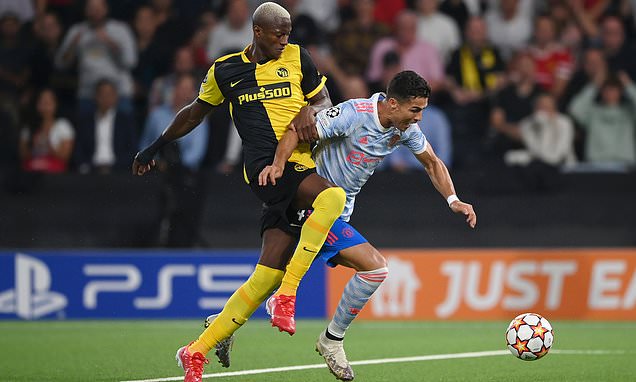 Ralf Rangnick's first Champions League match in charge of Manchester United may not take place at Old Trafford as planned, according to reports.

The 63-year-old German was confirmed as the Red Devils' new interim boss on Monday after he emerged as the man to be Ole Gunnar Solskjaer's short-term successor last week.

The venue of his first European match at the helm has been thrown into doubt with uncertainty over whether Swiss outfit Young Boys can travel to Old Trafford on December 8 because of the Omicron coronavirus variant, according to The Telegraph.


The report claims that UEFA are trying to find out whether the Young Boys squad would have to quarantine back in Switzerland for 10 days following the clash in the UK next week.

It reports that if the elite sport exemption rule does not apply then the originally planned home group tie would be changed to a venue in a neutral country, or postponed if a neutral venue cannot be found.

There will be chaos regarding tickets and travel costs if the match venue was to be moved with just over a week to go.

It has paved the way for the continuation of exceptional measures to stem the rising tide of Covid-19 cases.

The government's tally of Sunday's vote showed a wider-than-expected majority of 62 per cent of voters support laws that require Covid health passes to enter bars, restaurants and certain events.

It came as Switzerland reported its first probably case of the Omicron variant on Sunday, as entry requirements were tightened to check its spread.

The case relates to a person who returned to Switzerland from South Africa around a week ago, the Federal Office for Public Health said on Twitter.

Testing will clarify the situation in the coming days, it added. Switzerland announced it has banned all Britons with immediate effect amid concerns of the rising cases of the Covid super-mutant Omicron.

United progressed to the knockout stages of the Champions League last week as caretaker boss Michael Carrick guided them to 2-0 win over Villarreal.

Scientists have said they are concerned about the B.1.1.529 variant, named by the World Health Organisation as Omicron, as it has around 30 different mutations - double the amount present in the Delta variant. The mutations contain features seen in all of the other variants but also traits that have not been seen before.

UK scientists first became aware of the new strain on November 23 after samples were uploaded on to a coronavirus variant tracking website from South Africa, Hong Kong and then Botswana.

On Friday, it was confirmed that cases had been identified in Israel and Belgium but currently there are no known cases in the UK.

Professor Adam Finn, a member of the Joint Committee on Vaccination and Immunisation (JCVI), told Good Morning Britain on Friday that sequencing is being carried out around the UK to determine if any cases have already been imported.

Work is also under way to see whether the new variant may be causing new infection in people who have already had coronavirus or a vaccine, or whether waning immunity may be playing a role.

Professor James Naismith, director of the Rosalind Franklin Institute in Oxford, has said the new variant will 'almost certainly' make vaccines less effective, though they would still offer protection.

Pfizer/BioNTech, which has produced a vaccine against Covid-19, is already studying the new variant's ability to evade vaccines.