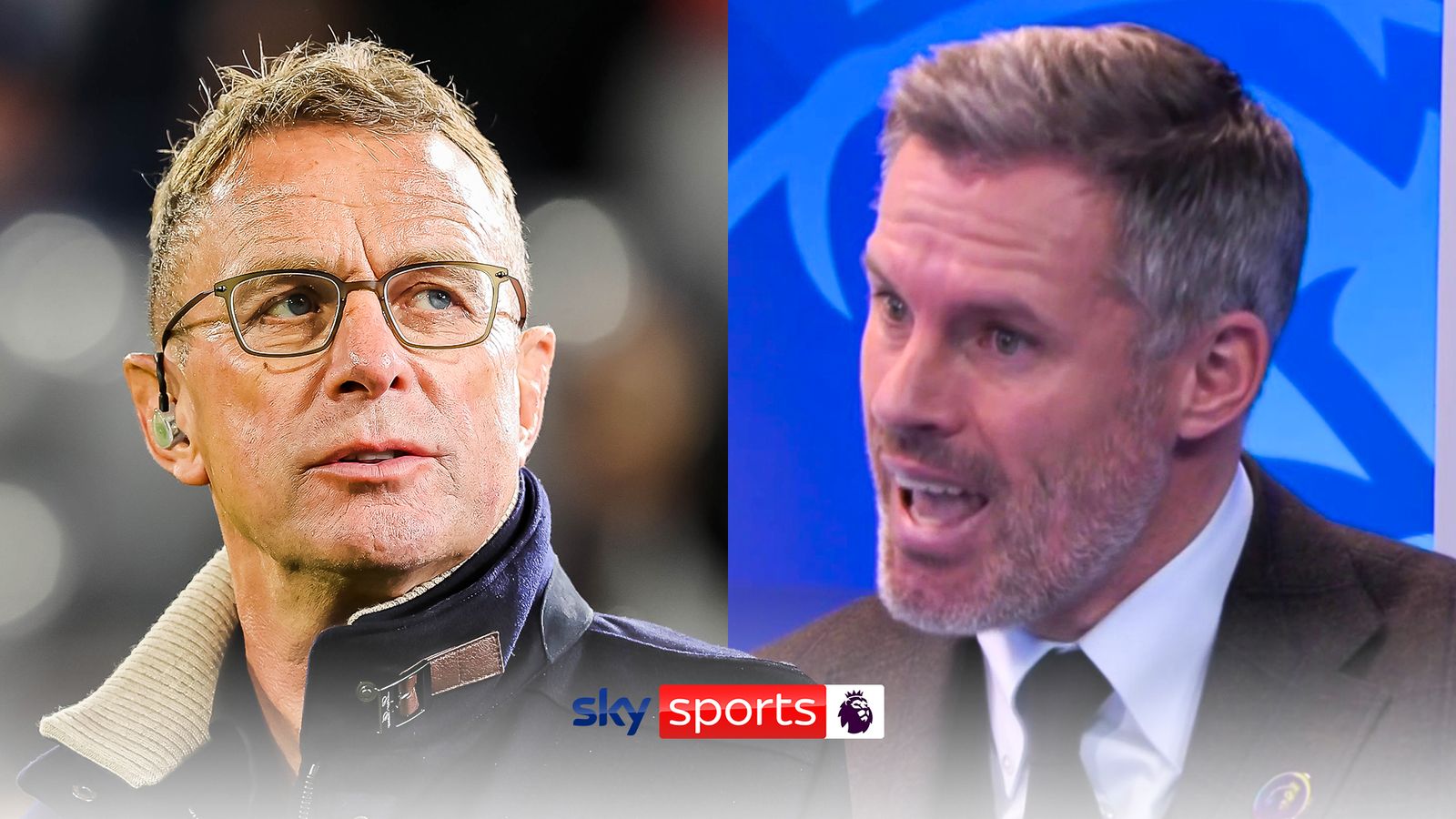 Jamie Carragher believes Ralf Rangnick's chief task at Manchester United will be to identify the club's next permanent manager.

Rangnick has arrived at Old Trafford to take charge until the end of the season, and will then take up a consultancy role as the club seek a permanent successor to Ole Gunnar Solskjaer.

The 63-year-old former Schalke, Hoffenheim and RB Leipzig boss has developed a reputation as one of the game's most influential coaches, helping to revolutionise German football with a focus on gegenpressing tactics.

Carragher has welcomed the German's arrival - but insists one task must be top of the agenda.

"I think the appointment of Rangnick will be a positive step in terms of how he wants football played," Carragher said on Sky Sports' Super Sunday, ahead of confirmation of Rangnick's appointment on Monday morning.

Manchester United have confirmed the appointment of Ralf Rangnick as interim manager until the end of the season.

"The top teams in European football, and three of them are in the Premier League, all play the way Rangnick has always wanted his teams to play going back 20 years.

"Top-level football is played like that and Manchester United were a million miles away from that.

"Rangnick is coming in now to make sure that Manchester United get back into the Champions League for next season.

"But Rangnick's biggest job is identifying the next coach. The top people at the club will be taking advice from him. He will want the next coach to be in his image so he'll be almost getting them ready for the next coach and how they want to play."

Carragher warned, though, that Rangnick's trademark high-press approach - a "heavy metal" style he has admitted to sharing with Liverpool's Jurgen Klopp - could take time to implement.

Image: Will Ralf Rangnick have his work cut out at Man Utd judging by these stats?

"Yes, Manchester United need [Rangnick] in terms of that there's a clear idea of what he wants to do.

"There's no exact science to win a football game - there are different ways - but Manchester United have not had a clear plan and this guy has a plan.

"The problem is that his plan could be chalk and cheese with Manchester United at the moment; there are five or six players you think won't fit into that way of playing.

"His way of playing has to be coached and trained on; it's not something you work on in a week. You need to learn to train for the physical output too; that can cause injuries and that may make it difficult for Manchester United to get into the top four."

"We have five different situations in football that decide football games: What happens if we have the ball ourselves? How do we play against defensive teams, against teams that attack high or try to press? "Number two is what do we want to do if the other team has got the ball? Our idea is simple - very similar to my coaching friend Klopp - our football is heavy metal, rock and roll, not slow waltz; we hate square passes, back passes. "Then we have the two situations of transition - what happens when we lose the ball and what happens when we win the ball?

"Then the set-pieces, which are highly important. All the top teams in all these five areas are above average, if not top."

Keane: Rangnick must get players running

"I don't have a problem with it," Keane said of Rangnick's appointment.

"The big decision is getting the right manager in [after Rangnick] and getting players like Fernandes and Ronaldo to start running.

Image: Ralf Rangnick was a key figure in the rise of RB Leipzig

"Man Utd have talented players in possession but the game is also about out of possession. They have the talent but it needs coaching.

"We hope [that the Rangnick appointment is a breakthrough], we hope so. The proof will be in the pudding over the next few years when we see who comes into the club, and that it's not because you know somebody or have a certain agent.

"You hope whoever does come into the club starts to make the right decisions, get the right people in for the job, and not because someone might know somebody, or they are a decent guy. You've got to go and work with people who are good at their jobs."

"It's a really good appointment and during his first few months in charge of that first team you'll see improvements, particularly in individuals.

"He likes working with young players who are energetic, willing to learn, hungry - and you look at the lads like Scott McTominay and Jadon Sancho, Mason Greenwood, Marcus Rashford, these players, he'll really enjoy working with so much talent there and in the next few weeks and months you'll see those boys kick on.

"He's had this mixture of overseeing clubs, director of football, been a manager at plenty as well, but like most coaches, they love being on the training ground day to day and having that close contact with players and I'm sure he'll be no different.

"I'm sure he'll go in like a whirlwind. He's obsessive, a bit of a control freak, although he says he's learnt to delegate a bit more as he's got older. But these people think about football from the moment they wake up to the time they go to sleep, even dream about it. That's how the top coaches are. He's certainly a football obsessive.

Speaking on the Sky Sports Essential Football Podcast, Alan Smith says he expects Ralf Rangnick to stamp his mark on the side very quickly.

"It will be much different [to under Solskjaer]. The demands on individuals in terms of what their roles are at any given time in a match, depending on where the ball is and so on, with Solskjaer you did feel it was kind of making it up as they went along.

"They have so much individual talent that Solskajer left them to it or hoped that talent would win the day. He obviously worked hard on the training ground but what he was working on wasn't working and he wasn't able to compete with the modern elite coaches.

"We'll see what Rangnick wants pretty quickly. And if that brings results and players feel it is making them a better player they'll be on that train with him."

"It's a fact that Ralf Rangnick has only won the German FA Cup. But it's about the context of the job in hand.

"If your job is to take a third division side into the Bundesliga, turn a village side into real contenders in three or four years, you're winning.

"If someone hands you the keys to a football club and says, we want to build something with a clearly defined playing structure with young players, players nobody knows about and sell them on; take it from the fourth division to the Bundesliga and Champions League, are you winning? I'd argue yes.

Image: Rangnick won the German Cup with Schalke in 2011

"The bit that's sometimes misunderstood is that when he was at the height of his coaching power in 2011 - he'd just taken Schalke to the Champions League final, just won the cup, three months into the next season, he resigned citing burnout.

"At that point, he took a sidestep - a club building job more than a coaching job - if he hadn't I think he would have a very different CV.

"Why has he not taken on big jobs in Germany like Bayern or the national team? When he came through in the late '90s, guys like him wouldn't get good jobs because he wasn't a former player and he wasn't a big name.

"Then, when he was in a position to get those jobs, it was difficult because he'd been at places where, like Sir Alex Ferguson, he'd been in charge of everything."

Klopp: Rangnick arrival 'not good news for other teams'

Rangnick has influenced the Liverpool boss in terms of playing style and Klopp knows exactly what to expect.

"Unfortunately a good coach is coming to England, that's how it is, to Manchester United," Klopp said last week.

"United will be organised on the pitch, we should realise that - that's obviously not good news for other teams."