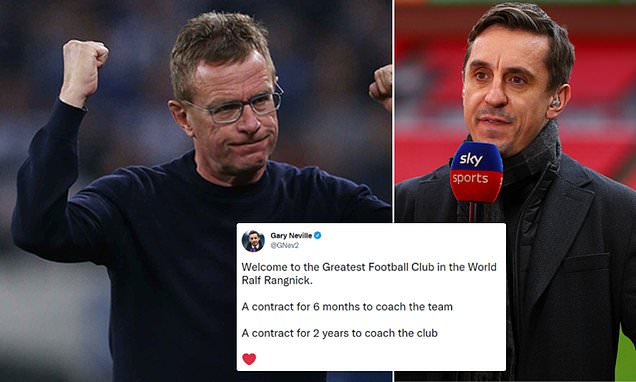 Gary Neville urged Ralf Rangnick to completely overhaul Manchester United both on and off the pitch after the German was confirmed as the club's interim manager on Monday morning.

Rangnick has been hired on a short-term contract to coach the first team until the end of the season before he then takes on a consultancy role for two years.

The German replaces Ole Gunnar Solskjaer, who was sacked earlier this month, while the Red Devils look for a new permanent manager.

The 63-year-old has joined from Lokomotiv Moscow, where he was manager of sports and development, and will take over from caretaker boss Michael Carrick.


Rangnick, who began coaching in the early 1980s, is a proponent of 'gegenpressing' and is well known for his ability to build, develop and mould football clubs into successful units both on and off the pitch.

Neville, who has been a fierce critic of United's outgoing executive vice-chairman Ed Woodward and his strategy towards football matters, welcomed Rangnick on Twitter but urged him to completely overhaul the club during his time in Manchester.

Neville tweeted: 'Welcome to the Greatest Football Club in the World Ralf Rangnick.

'A contract for 6 months to coach the team.

'A contract for 2 years to coach the club.'

Earlier this month, Neville laid out the challenges facing Woodward's successor as he prepares to leave Old Trafford at the end of the year.

United have not won the Premier League since 2013 and have been through four managers since Sir Alex Ferguson walked away over a decade ago.

Speaking on his Sky Sports podcast, Neville called for major changes at the heart of the club if they are to compete with the likes of Manchester City, Liverpool and Chelsea again.

He said: 'The new CEO must stamp his own authority on it and he has to assess everything's in place and put in place.

'He's got to assess the names of the coaches you've mentioned [McKenna, Phelan, Carrick], the backroom staff, the recruitment all the infrastructure that's been put in place over this last two or three years it's got to be tested, it's got to be stress tested.

'They've to work out whether that backroom team and the football knowledge in the club can challenge this club [Manchester City], we know the people here have been at Barcelona with Pep Guardiola, they've built dynasties at Barcelona, they're building another one here.

'You've got smart people at Liverpool, you've got hardened people, brutal, fantastic operators at Chelsea. So you've got to work out if you're the CEO of Manchester United, Ed Woodward ultimately over the last eight years has failed in his football objectives.

'On the business side, it's fine he may have done a good job, I don't know. But on the football side, the football objectives have failed. The new CEO has to come in and decide if he wants to play football manager or whether he wants to put really competent people in place, step away from it, take the role that say Martin Edwards, David Gill or other owners of other clubs let experts in football deal with that.

Speaking after his appointment had been confirmed, Rangnick said: 'I am excited to be joining Manchester United and focused on making this a successful season for the club.

'The squad is full of talent and has a great balance of youth and experience. All my efforts for the next six months will be on helping these players fulfil their potential, both individually and, most importantly, as a team.

'Beyond that, I look forward to supporting the club's longer-term goals on a consultancy basis.'

First-team coach Carrick – who has overseen a Champions League win over Villarreal and a draw at Premier League leaders Chelsea, where he dropped Cristiano Ronaldo – will remain in caretaker charge until Rangnick's work visa is finalised.

'Ralf is one of the most respected coaches and innovators in European football,' said United's football director John Murtough.

'He was our number one candidate for interim manager, reflecting the invaluable leadership and technical skills he will bring from almost four decades of experience in management and coaching.

'Everyone at the club is looking forward to working with him during the season ahead, and then for a further two years in his advisory role.'