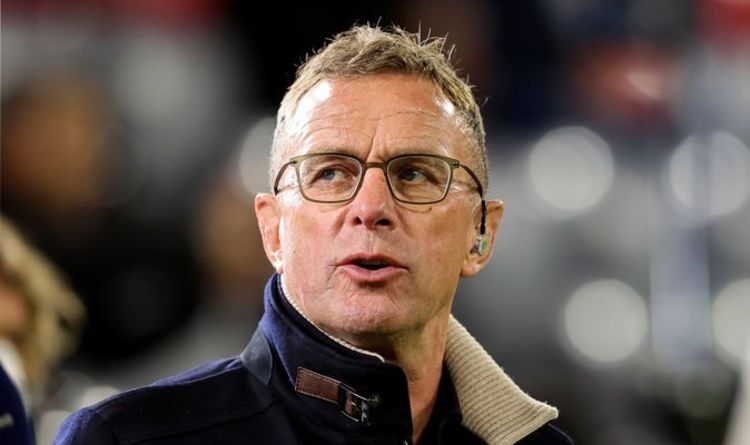 Manchester United interim boss Ralf Rangnick has made his opening address to fans after his appointment was confirmed on Monday. The German now faces an anxious wait to see if the finer details will be sorted in time to see him take charge in this week's crunch clash with Arsenal.

Michael Carrick has been in temporary charge of the Red Devils in the wake of Ole Gunnar Solskjaer's sacking.

The former England international seems to have given a good account of himself, capped off with a 1-1 draw at Stamford Bridge on Sunday.

But the United hierarchy always seemed intent on hiring a proven interim boss until the end of the season, when they are expected to go after a longer-term option.

After negotiations in the past week, the Red Devils have now officially confirmed Rangnick's appointment on a six-month contract, which will then evolve into a consultancy role.

His opening address, made via the club's official website, read: "I am excited to be joining Manchester United and focused on making this a successful season for the club.

"The squad is full of talent and has a great balance of youth and experience.

"All my efforts for the next six months will be on helping these players fulfil their potential, both individually and, most importantly, as a team.

"Beyond that, I look forward to supporting the club’s longer-term goals on a consultancy basis."

Michael Carrick has one win and one draw from his two games in caretaker charge (Image: GETTY)

When Rangnick receives clearance to fly to Manchester and begin working directly with the squad, attention will soon turn to his plans for Cristiano Ronaldo.

The Portuguese superstar was dropped for Sunday's clash with Chelsea, and he is broadly expected to struggle with Rangnick's intense pressing approach.

After the final whistle at Stamford Bridge, Ronaldo appeared to storm down the tunnel after his 26-minute cameo.

His goal-scoring exploits have been impressive since signing in the summer, but the team's fortunes as a whole have taken a hit - something Rangnick has been brought in to rectify.