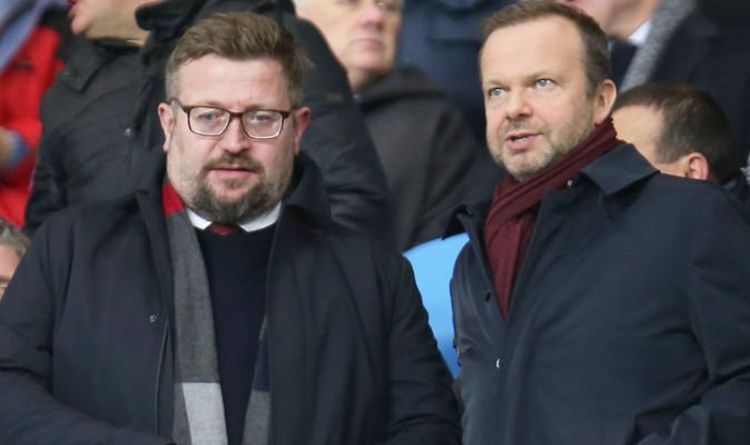 Manchester United director Richard Arnold is reportedly 'not particularly pleased' with the idea that Ed Woodward could delay his departure from the club. Woodward announced in April that he would be leaving his role as executive vice-chairman at Old Trafford at the end of 2021. However, there have been reports he could stay at the club longer.

Woodward has been in charge of appointing managers at United since the retirement of Sir Alex Ferguson in 2013.

And with United on the search for a permanent successor to Ole Gunnar Solskjaer, the 50-year-old could stick around to help with the appointment.

Solskjaer was sacked last Sunday and United are set to appoint Ralf Rangnick as interim until next summer.

But it appears Arnold feels it is his job to find the next permanent boss, not Woodward's.

Man Utd news: Ed Woodward is set to leave United at the end of the year (Image: GETTY)

That is according to Ian McGarry, who said on Reach PLC's Transfer Window podcast that Arnold is not best pleased with rumours surrounding Woodward.

"And, we understand here at the Transfer Window, that Arnold is not particularly pleased at the notion that Woodward has been briefing, privately and it's got into the public domain, that he may stay on in order to assist/aid/be involved in the decision-making process of the next permanent head coach/manager of Manchester United.

"Because as far as Arnold's concerned, that is his mandate, not Woodward's."