Tuchel: Man United did NOT look like a Ralf Rangnick team 'at all'
Daily Mail 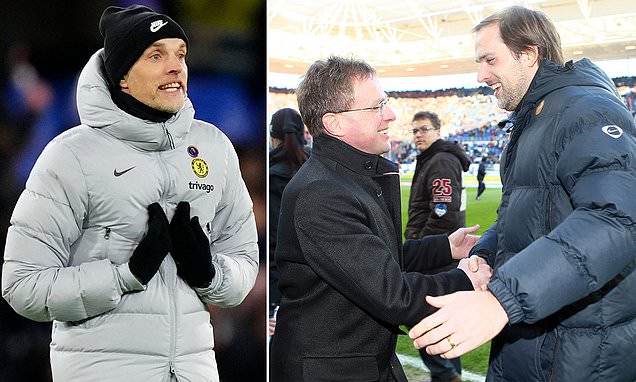 Thomas Tuchel was adamant that Manchester United did not look 'at all' like a Ralf Rangnick team yet after holding his Chelsea side to a 1-1 draw at Stamford Bridge on Sunday.

Rangnick is waiting in the wings to takeover as interim United manager and there was speculation before and during the game - not least from Gary Neville - that the German had influenced current interim boss Michael Carrick's team selection.

The Red Devils made the shock move to drop Cristiano Ronaldo to the bench and played a defensive trio in midfield of Scott McTominay, Nemanja Matic and Fred.

Indeed, there have been suggestions that technical director Darren Fletcher was communicating in real-time with Rangnick as images emerged of the Scot wearing an earpiece throughout the game.


But Tuchel claimed he did not see anything new in United that suggested former mentor Rangnick had already imprinted his philosophy at Old Trafford.

Asked directly whether United looked like a Rangnick team, Tuchel told Sky Sports: 'No, not at all.'

Reflecting on the match itself, Tuchel said: 'I was happy with our aggression, rhythm and intensity with how we defended. (I was a) bit surprised (with the result) as we had so many high ball recoveries and didn’t make more clearer chances.

But happy, absolutely happy. Happy to coach the team - a big effort, huge intensity, lots of ball recoveries in the opponent's half pushed up high. We controlled the counterattacks before they started, we were brave.'

Tuchel lamented that his side had to be more clinical against a low-lying defensive Man United, whose only goal came from a terrible error from Jorginho that gifted Jadon Sancho a goal-scoring opportunity.

'They defended deep, you need the first goal and more follow-ups and goals and big chances,' he said. 'If you don’t score, you’ll always run a bit behind as you’ll feel the stronger team play in the opponent's half.

'So we had some big chances we should have maybe used, but in general I’m very happy.

United scored thanks to a huge error by Jorginho, who made amends by scoring the equaliser

Despite the draw, Chelsea remain top of the Premier League, one point ahead of Manchester City.

Despite the fine margins among the title contenders, Tuchel refused to be downbeat about the result.

'We cannot be surprised, these things happen,' he said. 'We invest so much, we played good games against Burnley (which Chelsea also drew 1-1) and Man United and feel disappointed as we did by far enough as we pushed the limits and tried to win the games.

'Over the season you drop points, dig deep and then try get them back. Don’t count the points when you’re four up, one down. We’re in the race which is where we want to be.'