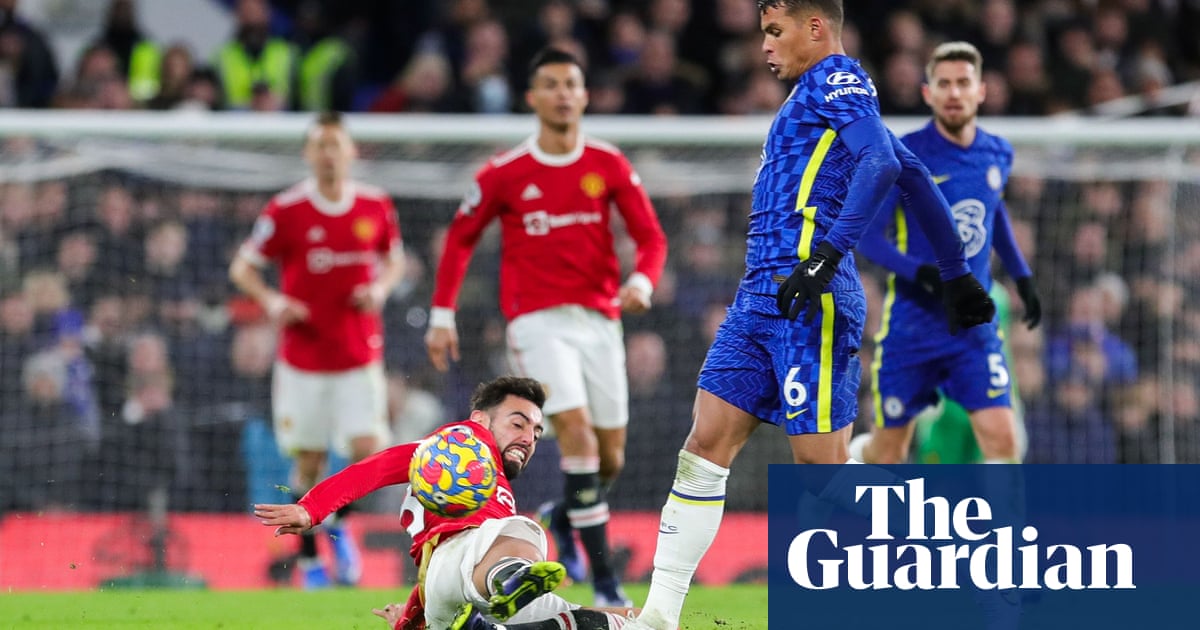 Édouard Mendy The goalkeeper was helpless when United broke after Jorginho’s calamitous error in the second half. Sancho gave him no chance with a cool finish. 6/10

Trevoh Chalobah The youngster’s form was rewarded with another start and he did not look out of place. He was not overawed by going up against Rashford. 7

Thiago Silva The Brazilian oozed class. His positioning was spot on, his reading of the game was superb and his alertness won Chelsea’s penalty. 7

Antonio Rüdiger The German’s quest for a goal from long range almost ended, only for his effort to crash off the bar. He later missed a glaring chance to win it. Defended solidly. 7

Reece James The wing-back went close with an inswinging free-kick just before half-time, but he was unable to find space on the right flank. Booked. 6

Jorginho The midfielder is not the kind of player who gets rid. That proved a problem when he was the last man and his failure to deal with Fernandes’s punt gifted Sancho the opener. He made amends by rescuing a point from the spot. 6

Ruben Loftus-Cheek He dwelled on the ball too much and infuriated Thomas Tuchel when he failed to release Werner in the 55th minute. There were some driving runs but it was not his day. 6

Marcos Alonso The Spaniard was ineffective after coming in for the injured Ben Chilwell. His lack of pace was a problem, allowing United to squeeze Chelsea’s left flank. 6

Hakim Ziyech The Moroccan had a fitful game, too often allowing United to muscle him off the ball. His decision-making left much to be desired. 5

Callum Hudson-Odoi The winger was wasteful with two good chances in the first half. He needed to be braver with his dribbling and was eventually taken off. 6

Timo Werner It did not feel like a game for the German. United stopped him using his pace on the break and he missed a great chance to equalise. 4

Substitutes: Mason Mount (for Alonso 78) The midfielder was roared on to the pitch, but he could not find a killer pass, 6; Christian Pulisic (for Hudson-Odoi 78) The American was dangerous after coming on to play at right wing-back, 6; Romelu Lukaku (for Werner 82) The striker was unable to make the difference against his old team, 6.

Timo Werner (right) was unable to make much of an impact playing as a lone striker for Chelsea. Photograph: Tom Jenkins/The Guardian

David de Gea He came to United’s rescue during the first half, denying Hudson-Odoi, Rüdiger and James. He could not do anything about Chelsea’s equaliser. 7

Aaron Wan-Bissaka The right-back’s awful defending gifted Hudson-Odoi an early chance and he gave away Chelsea’s penalty with a clumsy foul. Made a good block on Werner. 5

Eric Bailly The centre-back focused on doing the simple things well. He cleared his lines, got in the way of crosses and did not make any major errors. 7

Victor Lindelöf He was far too soft when Hudson-Odoi broke through early on but Chelsea could not do enough to test him. He had a competent game overall. 6

Alex Telles He did not let the side down after stepping in for the injured Luke Shaw. He defended well and made sure that James was unable to get into dangerous positions. 7

Nemanjc Matic The midfielder’s experience proved vital. He was an efficient screen in front of his back four and he used his strength to shackle Ziyech. 7

Fred The Brazilian was average on the ball, but his energy was useful and he irritated Chelsea at times. Had a penalty appeal waved away in the first half. 6

Scott McTominay The Scotland international offered bite in midfield but there was not much quality in possession. He was booked for a silly foul on Alonso. 6

Jadon Sancho The winger worked hard despite seeing little of the ball and he was cool when his moment arrived, ruthlessly punishing Jorginho’s mistake. 7

Bruno Fernandes Ineffective in an unfamiliar role up front. He struggled to create anything and almost gave away a goal with a dreadful pass to Hudson-Odoi. 4

Marcus Rashford The forward looked threatening on the break but he lacked support and often made the wrong choice. 5

Substitutes: Cristiano Ronaldo (for Sancho 64) It was a surprise to see the forward on the bench, but he did not make much of an impact after coming on, 6; Jesse Lingard (for Rashford 77) The midfielder came on too late to make a difference, 6; Donny van de Beek (for Fernandes 89) The Dutch international came on in the dying stages, 6.