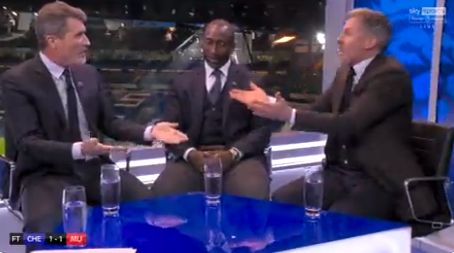 Roy Keane and Jamie Carragher had a heated debate over the role of Cristiano Ronaldo since his return to Manchester United.

After Michael Carrick’s decision to drop Ronaldo for their visit to Stamford Bridge, the role of Ronaldo has come into question in terms of whether United play better or worse with him on the pitch.

Keane, a former United player and Carragher, a former Liverpool player, duked it out in the Sky Sports studio after the game with the argument about why Ronaldo was signed and what he can do for United this season.

You can watch the full video below:

Things got VERY heated between @Carra23 and Roy Keane as they discussed Cristiano Ronaldo's role at Man Utd ?pic.twitter.com/uMBi3jSSvO

This is sure to be one in the season highlight reels in terms of best punditry moments of the season.