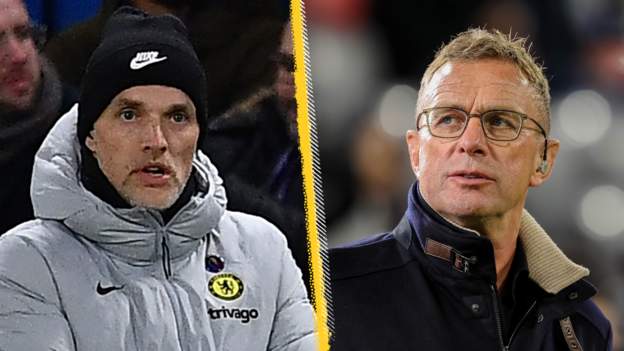 The sight of Manchester United technical director Darren Fletcher fiddling with an earpiece as he stalked his technical area sent the Stamford Bridge conspiracy theorists into overdrive.

If interim manager Michael Carrick and assorted members of United's post-Ole Gunnar Solskjaer backroom team were within earshot a few feet away, why did Fletcher need another form of communication? And who was he communicating with?

Those gathered on the Bridge's grassy knoll in what was hardly a cauldron of sound had their money on Ralf Rangnick, currently waiting on a work permit before completing his move from Lokomotiv Moscow to Old Trafford to take charge until the end of the season before assuming a "consultancy" role.

Of course, the truth will be less exotic and enticing but Rangnick, wherever he is, would no doubt have been watching and making copious notes ahead of trying to impose his style on a team that was allowed to fall into disrepair by Solskjaer before his inevitable dismissal.

Carrick's decision to drop Cristiano Ronaldo to the bench only added to the intrigue, and how we needed it on an afternoon of freezing temperatures and attritional football that ended honours even following a 1-1 draw.

Much has been made of Ronaldo's suitability for Rangnick's trademark "gegenpressing" style which demands high intensity, high pressing and rigorous physical demands. The great man is still a superb footballer and has demonstrated his worth in goals since returning to Old Trafford, but Rangnick's template does not sound like an ideal framework for his talent.

Indeed, former United defender Gary Neville shared the suspicions, tweeting before the game: "A lot of people having a go at Michael Carrick for dropping Ronaldo and picking that MDF [midfield]. I've a feeling the incoming manager has picked that team as it's a huge departure from midweek and what they've been doing."

All good stuff and a lively backdrop to a game lacking in real quality, but at least a point for United at the Premier League leaders after the carnage of those defeats by Leicester City, Liverpool, Manchester City and Watford means Carrick has given Rangnick something to work with. The wounds have been staunched for now.

No getting carried away, though.

United were second best pretty much throughout and a win would have fallen right into "smash and grab" territory, but Carrick's two games have brought a win at Villarreal in the Champions League and this creditable draw, so at least Rangnick arrives with a measure of spirit, morale and confidence restored.

And when Ronaldo was brought on, rather surprisingly for goalscorer Jadon Sancho with United 1-0 up, he was a marginal figure and stalked straight down the tunnel at the final whistle while his team-mates stayed out to acknowledge United's fans.

Carrick made his intentions clear by fielding a defensive-minded midfield trio of Fred, Scott McTominay and Nemanja Matic. United rode their luck and were thankful to keeper David de Gea in the first half but this was a very hard-earned point, which seemed to be the outcome written all over Carrick's team-sheet.

He can tell Rangnick that United at least showed some of the nerve and heart that have been missing as Solskjaer stumbled haplessly to the sack.

Rangnick will also have noted that for all United's defensive intentions in that first half, they were careless in possession and invited Chelsea pressure, especially Bruno Fernandes as he continues to be out of sorts. Every ounce of positivity, for the most part, came from Chelsea but United were the beneficiaries of their failure to make 24 attempts on goal count.

Rangnick is expected to arrive imminently and United's hierarchy, who really do need to prove they can get something right, will hope he at least has some of the impact Tuchel had on Chelsea when he succeeded sacked Frank Lampard in January.

Not winning the Champions League of course - this was almost miraculous on Tuchel's part and this United squad is a million miles away from that - but in at least galvanising, organising and inspiring a squad that does possess quality but has lacked guidance and direction, too often left to chance and their own devices in the hope someone like Ronaldo or Bruno Fernandes can compensate for deficiencies in coaching and tactics.

These are two of the selling points of the much-celebrated Rangnick as United clear the decks for the German to assume control. This is a squad that is much better than it has shown and United will hope Rangnick can deliver on the reputation and references that have preceded him since it was revealed the German was on his way.

Carrick will at least be handing over after two decent results and performances. It represents a minor start but there is still some major work lying ahead of Rangnick, irrespective of what can be regarded as a very creditable point at Stamford Bridge.