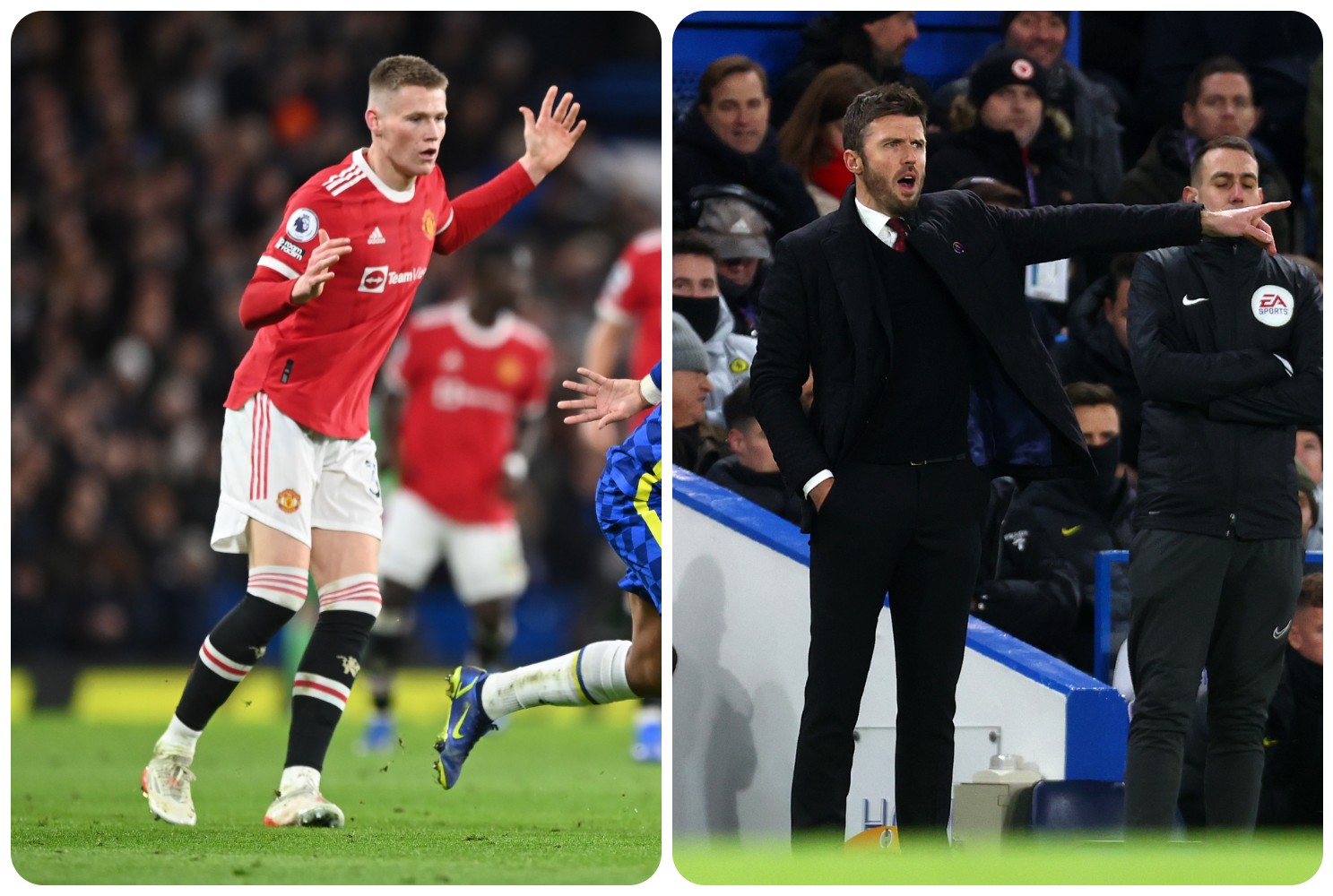 United were on the ropes at half time generating just 0.02 expected goals, but they came out the blocks swinging and capitalised on a mistake from Ballon d’Or candidate Jorginho off a cleared corner.

The Italian made a mess of a clearance which allowed Jadon Sancho and Marcus Rashford to pounce and put United one nil ahead against the run of play, with Sancho scoring his first Premier League goal for United.

Michael Carrick was bold in his selection today, and bar a rash attempt at a clearance from Aaron Wan-Bissaka which gave away a penalty, he would have masterminded an improbable victory for United.

You can see our player ratings for United below:

David De Gea (7) -Made one big save to deny Callum Hudson-Odoi early on and was tested with some frequency throughout the game. Looked assured when punching crosses away and dealt with everything he was tasked with like his prime self would have. Even had one occasion when he swept up a dangerous situation showing that he can play in the way of the modern goalkeeper.

Aaron Wan-Bissaka (7) – Rash decision to swing a leg at the ball in the penalty area without checking his peripheral vision. However, apart from giving away the penalty he was excellent with all his defensive tasks. Blocking, clearing, tackling and even tracking Chelsea attackers was mostly excellent

Eric Bailly (8) – Blocked and cleared everything that came his way. Also looked very assured when playing out from the back. A pratically flawless performance from the Ivory Coast international.

Victor Lindelof (7) – Like his centre back partner cleared and blocked almost everything that came near him. A solid display. Was eased off of the ball a few times a bit lightly and the ref luckily blew up for a foul on one of those occasions. Played some sloppy passes into the midfield when trying to set the team away on the counter.

Alex Telles (7) – Luke Shaw will definitely need to worry about his place in the team if Telles can keep up this kind of form. Assured on the ball and was solid defensively. Left his runner a couple of times but luckily United were so compact the danger was averted mostly. Never really able to get forward but did create the goal via his clearance.

Nemanja Matic (7) – Solid off the ball and was able to play out with the ball on many occasions via some good line breaking passes or carrying it forward. Nearly always picked the right option when in his defensive third. Excelled his the defensive role where his lack of mobility was covered by more mobile midfielders alongside him. Could have been better in the middle and final third’s on the ball but that was likely down to a lack of numbers in those situations.

Scott McTominay (9) – United’s best central midfielder today. Put himself about everywhere on the pitch. Earned a yellow in the first half that might have caused problems later on but managed himself brilliantly in the second half. Pretty good on the ball as well.

Fred (7) – A much improved performance from some he has displayed in recent weeks. Mostly tidy on the ball and got stuck in when he needed to. Had the chance to win it at the end for United but fluffed his lines while trying to chip Mendy.

Bruno Fernandes (6) – Not a vintage from the Portuguese but nevertheless a vital one for the team. Fernandes came back into the team today in order to help with pressing from the front and he played this role well. He was far from his best on the ball, nearly gifted Hudson-Odoi a goal in the first half which the Englishman failed to make the most of. Rightly hooked but arguably could have come sooner.

Jadon Sancho (7) – A disciplined performance for him today. Asked to do a lot of the dirty work for his team and was sure enough rewarded for his diligence in his task courtesy of Jorginho’s mistake that gifted him his first United Premier League goal. It should be the first of many. United’s biggest threat going forward all game and Carrick’s side really suffered when they lost him though injury.

Marcus Rashford (6) – Like Sancho, was asked to do a lot of the dirty work. His run to help Sancho with the goal was priceless in helping United get the opener. Subbed off for some fresher leg’s but again United missed his punch when he went off. This could be a front two Rangnick deploys fairly often if he chooses to omit Ronaldo from his team.

The result means Chelsea go one point clear of second place Manchester City, while United close the gap to the top four to five points bringing some much needed confidence in their defensive structure with them in the process.