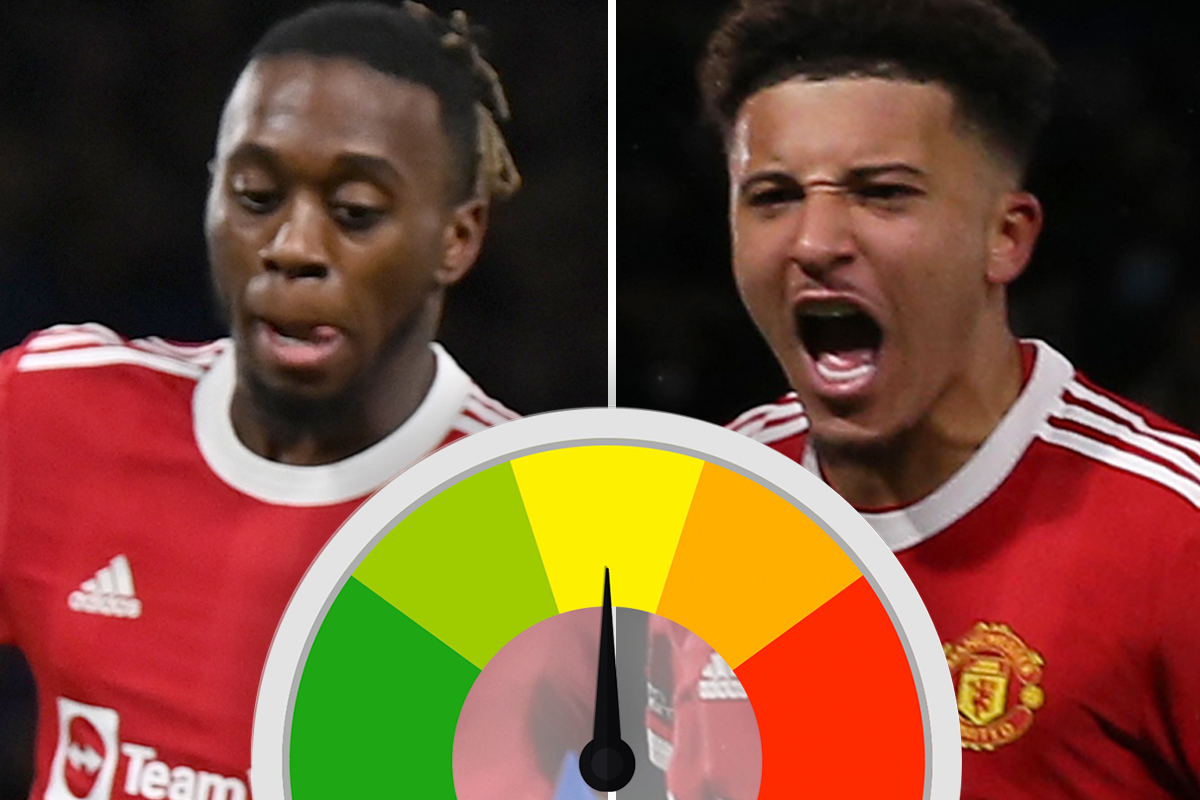 Jadon Sancho scored his first Premier League goal for the Red Devils after he pounced on Jorginho's error.

But Aaron Wan-Bissaka had a howler of his own as he gifted the Blues a penalty and an equaliser.

The Spanish goalkeeper had a busy afternoon with Chelsea pressing for most of the game.

Made a few smart saves and commanded his area well - like the De Gea of old.

Reckless tackle to gift Chelsea a penalty and relinquish Manchester United's lead with 20 minutes to go.

Chelsea were struggling to create chances before his rash lunge on Thiago Silva gave Jorginho the chance to level from the spot.

Led the back line pretty well in the absence of captain Harry Maguire.

Helped by the three-man midfield shield and had a pretty good handle on Timo Werner for most of the afternoon.

Stepped into the back four with big shoes to fill and was up to the task.

He looked assured in defence amid a barrage of Chelsea pressure for most of the afternoon.

Eric Bailly competes for the ball with Romelu LukakuCredit: Richard Pelham / The Sun

A nervy performance from the left-back. He struggled to deal with Ruben Loftus-Cheek down his wing and also Hakim Ziyech cutting in.

Needed a hand from Bailly and the midfield for large parts of the game.

A calming and composed presence in the middle of the park and the steadying influence this Man Utd team needed.

Gave his defence excellent protection and rarely ventured out of position.

Scott McTominay was a calming presence in the Man Utd midfieldCredit: Reuters

Looked assured as part of United's three-man midfield alongside McTominay and Fred.

Sometimes looked like a fish out of water when trying to get forward, but defensively solid and resolute.

Played alongside McTominay and Matic in midfield and also helped Telles deal with the threat down the left flank.

Found it hard to influence the game going forward due to defensive commitments, but had a glorious chance in the 88th minute which he fluffed.

Struggled to create much with only Sancho and Rashford up ahead of him for most of the game.

Crowded out for large parts of the game by the sheer numbers in midfield.

Pounced on Jorginho's error to win the ball and score his first Premier League goal.

Alive to the opportunity, quick to pounce and a cool finish.

Lived off scraps for a lot of the game and found the going tough in the first half from his inside left position.

But he was a different player after the break and took advantage of more and more Chelsea gaps that appeared.

Marcus Rashford had a game of two halves at Stamford BridgeCredit: Getty

Started the game on the bench much to everyone's surprise.

Manchester United lost some of their attacking impetus and counter-attack threat when he replaced Sancho.