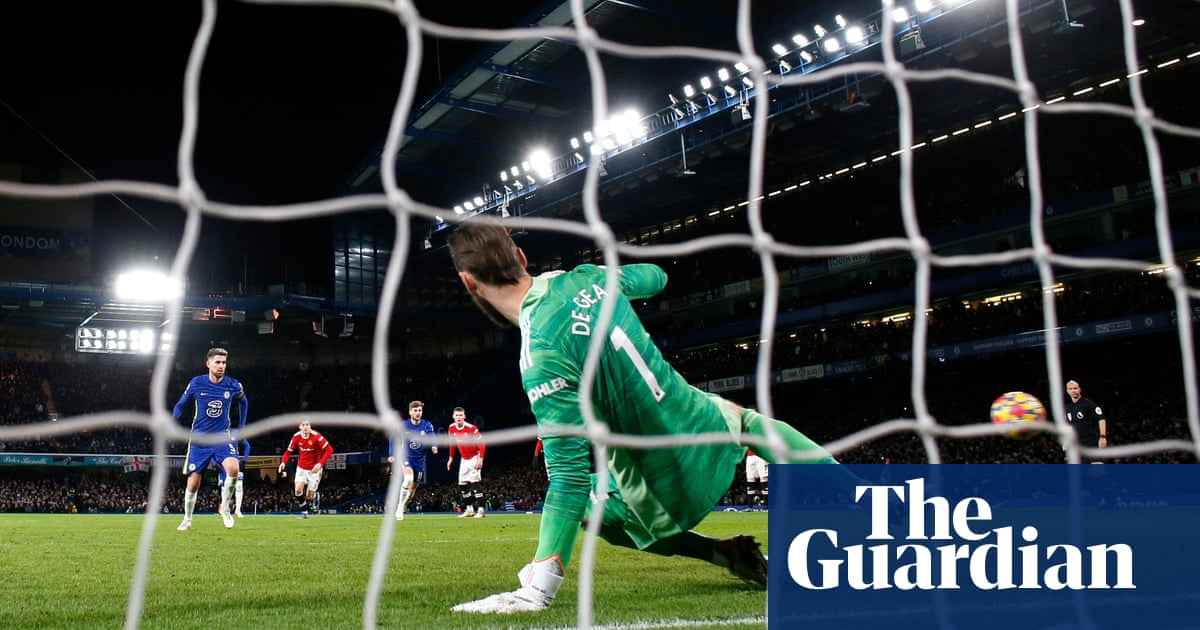 It was a day when Manchester United defended in numbers, when they sacrificed all attacking ambition in pursuit of something, anything, to stop a rot that had claimed the manager, Ole Gunnar Solskjær, and sent their Premier League season into meltdown.

It was a long way from being pretty but with Ralf Rangnick looking on from afar – the manager who is set to step in until the end of the season, the interim to the current interim, Michael Carrick – the club got what they wanted.

Carrick had started with Scott McTominay, Nemanja Matic and Fred in front of the back four and it felt like a trick of the mind when Jadon Sancho streaked clear to put them in front at the start of the second half. The goal followed a terrible piece of control by Jorginho after United had punted clear following a Chelsea free-kick and, briefly, an outlandish thought flickered.

It felt as though United simply wanted to avoid another humiliation after those against Liverpool and Manchester City – the other title contenders – which had effectively done for Solskjær. Could they somehow steal victory?

Jorginho would disabuse them of the notion, atoning in part for his lapse when he converted from the penalty spot after Aaron Wan-Bissaka’s silly foul on Thiago Silva and thereafter Chelsea pushed for the winner. It looked as though Antonio Rüdiger would get it at the death, after Cristiano Ronaldo, who played only as a 64th minute substitute, lost Christian Pulisic, another substitute, and watched him cross. Rüdiger was well placed, just outside the six-yard box, only to blaze high. For Chelsea, who saw their lead at the top of the table cut to one point by Manchester City’s earlier win, it was galling.

United had arrived as the division’s worst team on recent form – just four points from seven games and 17 goals conceded during the period – and they set up to make themselves as solid as possible, Carrick doubling down in defensive midfield and starting not one or two but three screening players.

Was the hand of Rangnick at work? Or was it merely a reaction to United being without three of their first-choice back four – Harry Maguire, Raphaël Varane and Luke Shaw? United invited pressure at the outset and, but for David de Gea, they would have been behind early on.

Hakim Ziyech was allowed to turn too easily inside the area and De Gea saved his deflected shot but the big chance followed horrible United defending moments later. When Marcos Alonso headed back a high Silva ball, Wan-Bissaka got himself into a tangle and Callum Hudson-Odoi moved inside Victor Lindelöf as if he wasn’t there. The angle was tight and De Gea turned Hudson-Odoi’s shot past the far post.

Jadon Sancho (right) celebrates with Fred after giving Mznchester United the lead against the run of play. Photograph: Phil Duncan/ProSports/Shutterstock

Chelsea – who missed the injured N’Golo Kanté – gorged on possession and, on the rare occasions that United had the ball in the first half, the home team flooded men around them, stifling them, seeking to force turnovers high up the pitch. They struggled to prise United apart before the interval with their own work, although Rüdiger almost broke the deadlock with a blast from outside the area. The connection was true and it fizzed against the crossbar. It was unclear whether De Gea had brushed the ball with his fingertips.

Carrick had insisted that Ronaldo’s reaction to be being named among the substitutes had been “great”. It was simply a cold-headed selection decision which, in Carrick’s words, did not “need any more drama than that”. All the best with that, Michael. He recalled Bruno Fernandes and started him as a false nine – another out-of-the-box decision – demanding that he led the press with intensity.

Fernandes did so but he was mainly to be seen in deeper areas. On 36 minutes. he popped up at left-back and tried to ping a crossfield pass, which he got all wrong, picking out only Hudson-Odoi in the middle, five yards outside the area. The striker advanced but could not muster power in his shot.

United offered precious little as an attacking force before the interval, with Sancho taking a heavy touch on a long ball as he tried to break through and Fred appealing in vain for a penalty against Rüdiger after nutmegging him in an isolated United foray into the area. Fred simply ran into him.

The onus was on Chelsea, with United perfectly happy with 0-0; to see whether they could nick something on the counter. And then they did. Jorginho had the perfect view of it all after his aberration and he had the sinking feeling long before Sancho beat Édouard Mendy. It was a nice finish, Sancho using Marcus Rashford to his left as a decoy before rolling home.

United remained in their deep block, although they flickered on the break for the first time and Chelsea could feel the anxiety rising, particularly when Timo Werner shot wildly when in space after a corner.

What Chelsea needed was a break and they got one when Wan-Bissaka went through Silva as he attempted to clear a corner. It was a mistake, a costly misjudgment by the out-of-form right-back and Anthony Taylor, the referee that Chelsea fans love to hate, gave the penalty. When Jorginho kept his cool, the grandstand finish was on.

Wan-Bissaka got back to tackle Werner, Ziyech shot tamely at De Gea and United nearly nicked it when Mendy passed straight to Fred only for him to get the attempted lob all wrong, with teammates available for a pass. Rüdiger’s later miss was more glaring.