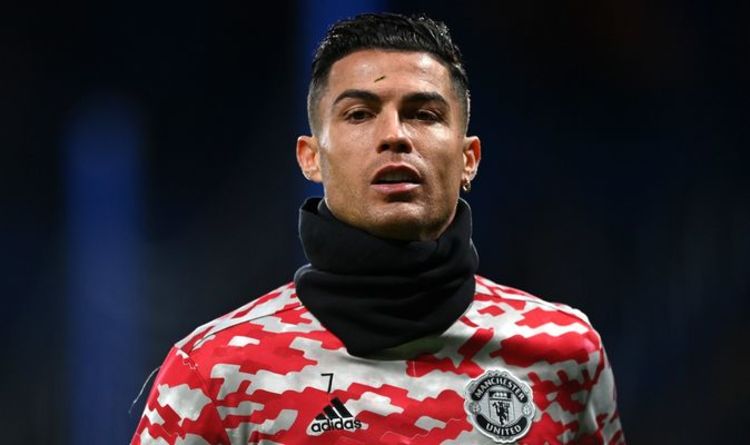 Cristiano Ronaldo was spotted marching down the Stamford Bridge tunnel without acknowledging the away fans in the immediate aftermath of Manchester United's draw with Chelsea on Sunday afternoon. The five-time Ballon d'Or winner was initially named as a substitute by caretaker boss Michael Carrick, with Bruno Fernandes being given the nod to lead the line for the Red Devils in west London.

United took the lead shortly after half-time through Jadon Sancho, who capitalised on Jorginho's poor touch to give the visitors a welcome advantage.

However, the Chelsea midfielder redeemed himself with 21 minutes left to play, equalising from the penalty spot after Aaron Wan-Bissaka's foul on Thiago Silva.

Ronaldo was introduced off the bench to replace Sancho after the hour mark but was unable to provide the winning spark for United.

He picked up a needless booking for dissent in stoppage time and cut a frustrated figure after the full-time whistle.

The mercurial 36-year-old stormed down the tunnel without shaking hands with the opposition or clapping the United fans in attendance.

JUST IN: Morgan calls Carrick 'clueless' as he rips into Man Utd caretaker

Ronaldo headed straight down the tunnel after the full-time whistle (Image: GETTY)

Ronaldo has been singled out for marching off the pitch on a number of previous occasions since rejoining United in the summer transfer window.

He was clearly upset after his side's draw with Everton at Old Trafford earlier in the campaign and stormed into the dressing room without hesistation at the end of the match.

United legend Rio Ferdinand jumped to Ronaldo's defence at the time, insisting that he can understand why the former Real Madrid icon was angry about the situation.

"He stomped down the tunnel disappointed about the result and we’ve all been there," the former England centre-back told BT Sport.

"I think it’ll be a mixture of things, he’s a man in form having scored five in five, he wanted to continue that vein of form and shoot his side to victory. I understand the frustrations and it comes out like that."

We'll be bringing you the very latest updates, pictures and video on this breaking news story.
For the latest news and breaking news visit: express.co.uk/sport/football
Stay up to date with all the big headlines, pictures, analysis, opinion and video on the stories that matter to you.
Follow us on Twitter @DExpress_Sport - the official Daily Express & Express.co.uk Twitter account - providing real news in real time.
We're also on Facebook @DailyExpressSport - offering your must-see news, features, videos and pictures throughout the day to like, comment and share from the Daily Express, Sunday Express and Express.co.uk.