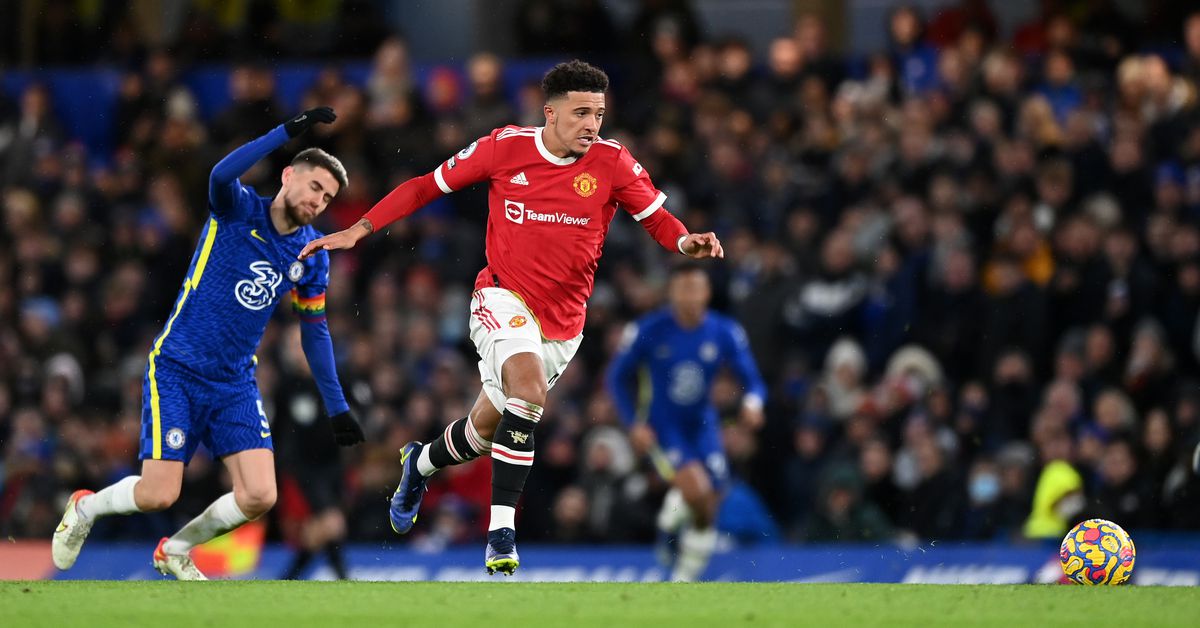 Manchester United scraped a 1-1 draw away at Chelsea on Michael Carrick’s final match in charge before the arrival of Ralf Rangnick. It wasn’t a great performance from a new-look United, but they’ll doubtless be satisfied to have escaped Stamford Bridge with a very hard-earned point.

Chelsea dominated from the first whistle, and almost took the lead inside four minutes. Some confused defending from Aaron Wan-Bissaka and Victor Lindelöf allowed Callum Hudson-Odoi to pick up a bouncing ball angled into the left channel, though his low, curling shot was blocked by the outstretched leg of David de Gea.

United ‘s defence was under near-constant pressure in the first half, but just about managed to withstand a barrage of Chelsea crosses. Blues centre-half Antonio Rüdiger took things into his own hands with a vicious, dipping effort from the edge of the penalty area just past the half-hour, which de Gea managed to tip onto the crossbar.

It took until the final five minutes of the first half for Carrick’s side to cause Chelsea any concern, and even then it was only a half-chance. Fred exchanged passes with Scott McTominay before releasing Jadon Sancho with a smart lofted pass, though he couldn’t bring the ball under control, and it trickled through to Édouard Mendy.

Chelsea’s dominance only made United’s opener all the more amusing. Five minutes into the second half, a Reece James free-kick was walloped clear by Bruno Fernandes, towards Jorginho alone on the halfway line. The Brazilian’s first touch was clumsy, and pounced upon by Sancho, who tore through on goal with Marcus Rashford. Sancho kept his cool, feigned to square for his teammate, before slotting calmly past Mendy for 1-0.

Sadly, United’s joy was short-lived. Five minutes past the hour, Wan-Bissaka made a rash challenge, swiping through the back of Thiago Silva’s legs while defending a Chelsea corner. The Brazilian centre-half tumbled to the ground; the referee pointed to the penalty spot; and Jorginho stepped up to earn his redemption, chipping a delicate penalty into the bottom corner.

The momentum again swung Chelsea’s way, and again United hung on. With just over 10 minutes left, Wan-Bissaka made amends for his earlier mistake, making a superb block to deny Timo Werner a certain goal from close range. The Blues introduced former United man Romelu Lukaku in a bid to crank up the pressure yet further, but still the game remained deadlocked.

Chelsea made another calamitous mistake with just a couple of minutes left on the clock, as Mendy gifted the ball to Fred deep in the Blues half. However, the Brazilian midfielder couldn’t quite work out what to do, and ended up chipping the ball straight back to the keeper.

Rüdiger might have won the game for Chelsea at the very death, when Christian Pulisic’s chipped cross found him unmarked at the back post. The German defender made a clean contact, but wellied the ball high over the top of the bar, seconds before the referee sounded the final whistle.