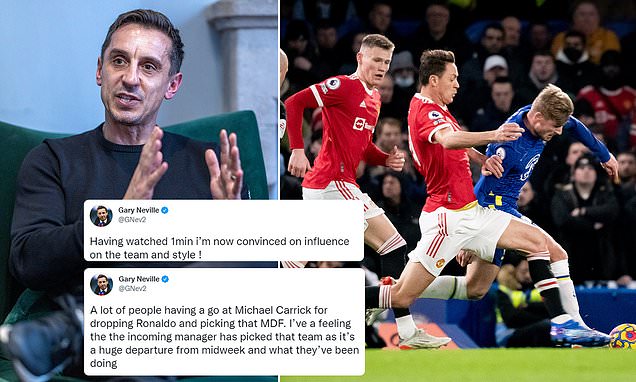 Gary Neville believes Ralf Rangnick is already having an influence over Manchester United's style of play - even before officially joining the club.

Rangnick has reached an agreement with the Red Devils over taking over on an interim basis until the end of the season, before taking up a two-year consultancy role at Old Trafford.

Michael Carrick is still in temporary charge for United's trip to Chelsea and there was a big shock before the game as it was announced that Cristiano Ronaldo would start on the bench.

Neville - who is not part of Sky Sports' coverage for the game - tweeted that he felt the line-up was picked by incoming interim boss Rangnick.


Match of the Day presenter Gary Lineker disputed Neville's claims suggesting there was 'zero' chance that Rangnick chose the team.

Neville originally posted: 'A lot of people having a go at Michael Carrick for dropping Ronaldo and picking that MDF (midfield).

'I've a feeling the the incoming manager has picked that team as it's a huge departure from midweek and what they've been doing.'

Lineker responded to the former United defender: 'No chance of this being true. Zero.'

Neville then asked Lineker if he had 'been onto Ed,' appearing to joke that the BBC presenter had spoke to vice-chairman Woodward. Lineker in response joked that he had spoke to Rangnick.

United chose a cautious looking midfield three consisting of Fred, Scott McTominay and Nemanja Matic while Bruno Fernandes started up front with Jadon Sancho and Marcus Rashford on the wings.

After kick-off United showed immediate signs that they were looking to press Chelsea with intensity.

This didn't go unnoticed by Neville who spotted the change straight away.

He tweeted: 'Having watched 1 min i'm now convinced on influence on the team and style!'

League leaders Chelsea struggled to break Manchester United down in the first-half with the teams going into the break still level.

United legend Keane said: 'Maybe that's the start to a new beginning for United but they need to keep it up and still do more when they're in possession.'

He said: 'You have to (play tactically) you can't come here free-minded and you need to respect Chelsea.

'Right to keep pressure on them in their half and try keep the ball as far away from your goal as possible.'

Keane added that United needed to learn to pick the right times to press pointing out their recent humiliating defeats to Liverpool at Old Trafford (5-0) and away at Watford (4-1).

He said: 'It's picking when to press, don't be silly like recently against Watford and Liverpool. Pick the right time to press.'