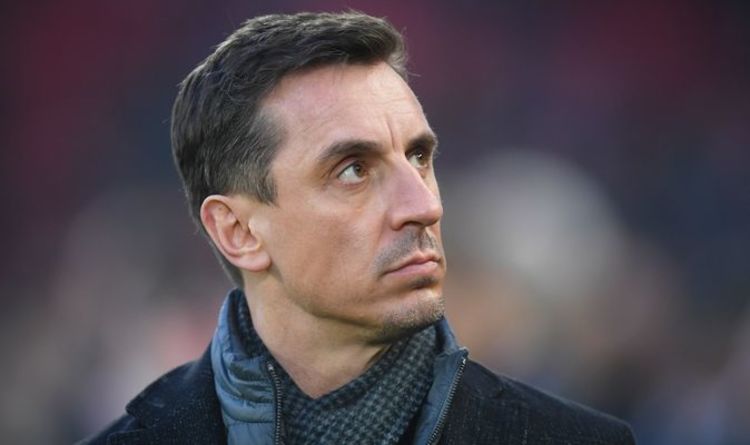 Gary Neville has suggested that Ralf Rangnick may have been responsible for the decision to omit Cristiano Ronaldo from Manchester United's starting side against Chelsea on Sunday afternoon. Rangnick is imminently expected to take charge of the Red Devils on an interim basis after agreeing a six-month deal to succeed Ole Gunnar Solskjaer in the dugout earlier this month.

The German coach, who is famed for his previous work with Schalke, Hoffenheim and RB Leipzig, is set to move into a directorial role on a two-year contract at the end of the season.

He will be tasked with saving United's blushes after a hugely disappointing start to their Premier League campaign, with the 20-time champions currently sitting outside the division's top five.

Michael Carrick was named as the Red Devils' caretaker boss in the immediate wake of Solskjaer's departure and took charge of what is likely to be his final game at the helm against Chelsea on Sunday.

The 40-year-old raised plenty of eyebrows with his decision to name five-time Ballon d'Or winner Ronaldo among the substitutes for the trip to Stamford Bridge.

Carrick also opted for a midfield trio of Fred, Nemanja Matic and Scott McTominay to the disappointment of many United supporters on social media.

However, Neville has suggested that Carrick may have been forced into leaving United's team selection duties to Rangnick ahead of the latter's expected appointment.

"A lot of people having a go at Michael Carrick for dropping Ronaldo and picking that MDF [midfield]," said Neville via Twitter.

United switched to a 4-3-3 on Sunday with Bruno Fernandes as the central striker in place of Ronaldo, while Jadon Sancho and Marcus Rashford occupied the wide positions.

Arsenal receive Vlahovic transfer boost but Edu may have to wait

Carrick explained the decision to drop Ronaldo to the bench ahead of kick-off, claiming that he was simply looking to switch things up against the Premier League leaders.

"A few tweaks and changes to freshen things up," he said.

"Cristiano Ronaldo is your standout name [to be on the bench]. I have had a good chat with Cristiano, and he was great."

Meanwhile, it remains to be seen how United will fare under the guidance of Rangnick when he finally takes charge of the club in the near future.

United are imminently expected to appoint Rangnick on an interim basis (Image: EXPRESS)

The 63-year-old received high praise from Liverpool boss Jurgen Klopp earlier this week, with the latter suggesting that Rangnick would represent a shrewd acquisition for his side's bitter rivals.

"Unfortunately a good coach is coming to England, that's how it is, to Manchester United," Klopp told reporters at a press conference.

"United will be organised on the pitch, we should realise that. That's obviously not good news for other teams."