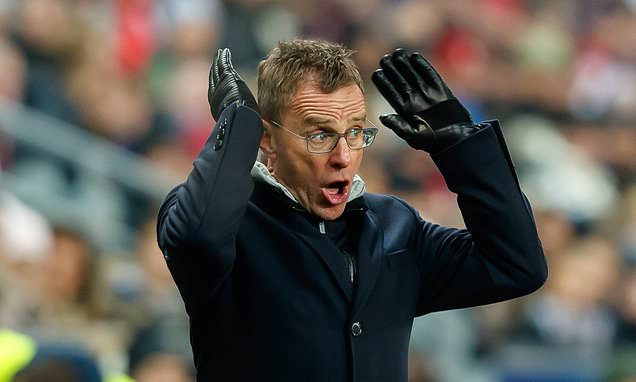 Rangnick has reached an agreement with the Red Devils over taking over on an interim basis until the end of the season, before taking up a two-year consultancy role at Old Trafford.

The 63-year-old, known as the 'Godfather of German Football' has influenced the likes of Jurgen Klopp, Thomas Tuchel and Julian Nagelsmann with his style of play across his managerial career.

Carragher said Rangnick has a 'clear plan' but will find it difficult to teach some of United's players his desire style of play.


He said on Sky Sports:‘There’s a clear plan of what he wants to do.

'When you watch Man United you’re not quite sure what they’re doing. There’s no exact science on how to win a football game, but United have not had a clear plan.

'This guy has got a clear plan. The problem he’s going to have is his plan is chalk and cheese to United.

'There are five or six players who you think aren’t going to fit into that system. This needs to be coached, this isn’t something you work on and it’s done in a week. It’s difficult to find the time to train.'

Carragher's comments were echoed by Liverpool boss Klopp on Friday who said that Rangnick 'will have no time to train' due to the amount of games United play.

Klopp himself had similar problems when he took over Liverpool back in October 2015.

Liverpool suffered a lot of injuries in their early days under the German, with some pointing at the German's relentless high pressing system.

Carragher said: 'When Klopp first came remember how many injuries they had. That may make it difficult for him to get United into the top four.’

Temporary manager Michael Carrick is in charge for Sunday's trip to Stamford Bridge to play Chelsea.

It is widely expected that Rangnick will be in charge for United's clash with Arsenal at Old Trafford on Thursday.