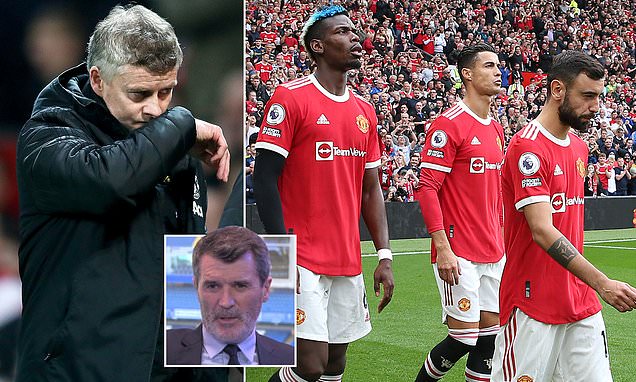 Solskjaer's tenure as United manager came to an end last weekend following a series of disappointing performances this season, with the 4-1 defeat away to Watford proving to be the final straw for the Norwegian.

Former United midfielder Keane believes that the United players didn't do enough to keep Solskjaer in the job and added that they need to improve significantly if they are going to challenge for major honours.

Speaking on Sky Sports, Keane said: 'They're not working as hard as the three teams at the top who are brilliant, have a lot of talent. Marcus said we have to take responsibility, these players don't. It's too late, the damage is done.


'Leopards don't change their spots. Man United have talented players, particularly in possession, but these players don't run, they don't work as a team, they work as individuals. That's not enough to win the big prizes.

'I don't know what's going on on the training pitch but the signs are they don't work hard enough. When they get interviewed after games they're like robots. Maybe Ole was too friendly with them because these lads have done what I predicted and they've thrown him under the bus.'

Keane was also heavily critical of the work-rate of some of United's players, stating that Cristiano Ronaldo, Bruno Fernandes and Paul Pogba don't do enough running when they don't have the ball.

Keane said: 'If it was just about in possession, I'd still be playing. There's nothing new there. The biggest thing is getting players to run, Ronaldo, Fernandes, Pogba, they've stopped running out of possession. They have to improve on set-pieces of course.'

United beat Villarreal 2-0 in their first game since Solskjaer's departure and they will be looking to produce an impressive display when they face Chelsea away on Sunday, with Michael Carrick remaining in temporary charge.

Ralf Rangnick is set to manage United until the end of the season but he is likely to face a considerable challenge in terms of getting the team to work as a unit.

Despite the undoubted quality he possesses, concerns have been raised regarding Ronaldo's lack of tracking back.

United go into the game against Chelsea in ninth place in the Premier League and they have another high-profile encounter to come on Thursday when they take on Arsenal.

Rangnick could help to improve matters if he can implement his philosophy and issue clear instructions to the players, something which didn't appear to be happening under Solskjaer.